COLUMBIANA – A 54-year-old Alabaster man is preparing to stand trial on robbery and assault charges tied to a 2014 shooting off Simmsville Road, according to Shelby County Circuit Court records. 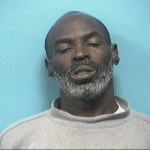 As of July 9, no future trial date had been set.

Rhine is facing felony counts of first-degree robbery and second-degree assault after he was indicted on the charges in February. He pleaded not guilty to the charges on March 24. He has remained in the Shelby County Jail on bonds totaling $150,000 since his Dec. 31, 2014 arrest.

According to the indictments, Rhine allegedly shot a victim during a robbery off Fifth Avenue Southeast shortly after 10 a.m. on Dec. 30, 2014. The indictment alleges Rhine stole U.S. currency from the victim and shot the man, causing serious physical injury.