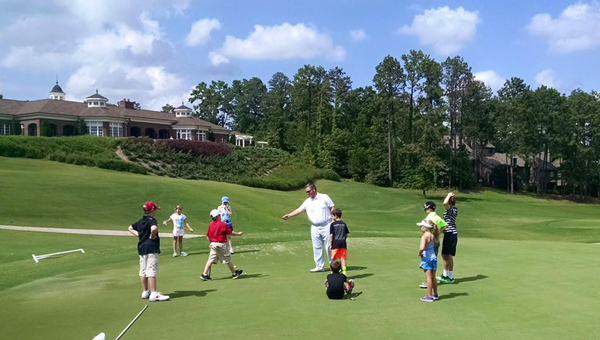 The Inverness Country Club has hosted PGA junior golf league tournaments at its course this summer as a part of its junior golf outreach, which also includes camps for kids ages 6-16. (Contributed)

NORTH SHELBY – For the last several summers, Inverness Country Club has put on summer camps for interested golfers. This year is no different, as Inverness is holding golf camps again this summer, and the club has added a few new features to the summer youth golf experience.

“We’ve added a few things this year,” Marshal Robinson, one of Inverness’s golf pros and camp instructors said on July 9. “This year we are participating in the PGA Junior League, which is a nationally organized program. It basically is beginners getting started in tournament-style play.”

The PGA JLG is for children aged 13 and under, and consists of two person teams competing against each other in a scramble-style format, as opposed to stroke-style competition, said Robinson. In a scramble tournament, every member on a team tees off on every hole, and then they decide which one tee shot they will play. Each team member then shoots from the spot of the chosen tee shot, and the best ball is again chosen. This process is repeated until the ball is holed.

This is the first summer that Inverness has been involved with the PGA JGL, and hosted a tournament earlier in the summer.

PGA JGL is only offered to 13-year-olds and under, and Inverness offers golf lessons for kids up to age 16. The players above the age of 13 have the opportunity to compete in the Birmingham Golf Association (BGA) junior tour and the Dixie PGA Junior Tour.

Inverness also offers sports camps in addition to the golf camps, which pull on average about 24 kids, said Robinson. They are staggered throughout the summer to give kids an opportunity to take part in a wide array of activities. The golf camps run for two days, and the next camp will take place from July 21-23 from 8:30- 11 a.m. For more information, call the Inverness golf shop at 205-991-8610.