ALABASTER – A 29-year-old Jemison woman was released from the Shelby County Jail on a $5,000 bond after she was charged with allegedly smoking marijuana near multiple children. 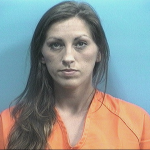 The Alabaster Police Department arrested Jessica Latrice Campbell, who lists an address on Chilton County 91 in Jemison, on July 7 and charged her with one felony count of chemical endangerment of a child.

According to her arrest warrant, Campbell’s charge came after she allegedly “smoked marijuana while in a vehicle occupied by minor children” on July 4.

Campbell was released from the Shelby County Jail on July 8 after posting a $5,000 bond. She is now scheduled to appear in Shelby County Circuit Court for a preliminary hearing at 8:30 a.m. on July 29, according to court documents.

Chemical endangerment of a child is a Class C felony, and is punishable by up to 10 years in prison upon conviction, according to Alabama law.