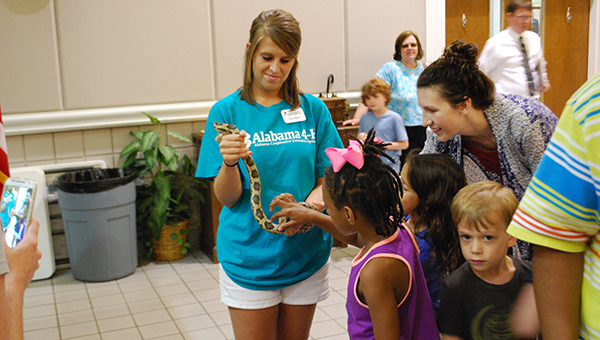 Amy Walker of the Alabama 4-H Center holds Morris the gray rat snake as kids from Helena’s Summer Reading Program come up to touch him and take pictures with him. (Reporter Photo/Graham Brooks)

HELENA–Scales, feathers, shells and more were seen at Helena City Hall on Wednesday, July 8, as the Alabama 4-H Center made a visit to Helena’s Summer Reading Program.

Amy Walker and Marisol Clark of the 4-H Center in Columbiana traveled to Helena, bringing a few of the center’s native and non-native species to introduce to children participating in the reading program.

Some of animals included reptiles such as Doug the turtle, Erwin the bearded dragon and Morris the gray rat snake.

The two birds the 4-H center brought were Calhoun the eastern screech owl and a Harris’s hawk named Lobo.

Walker and Clark brought each animal out one-by-one to discuss different facts about the animals such as their habitats, diet, special characteristics, if they are a native species to Alabama and more.

Calhoun the eastern screech owl was both Walker and Clark’s favorite animal that they brought to show off.

They explained how Calhoun was struck by a car earlier in his life, and the aftermath of the accident left Calhoun with a detached retina in one eye. That’s when he was taken into the 4-H Center.

The kids had various reactions to each animal, and most of the questions came once Morris the gray rat snake came out.

The top question kids asked about the snake was “does he bite?”

Walker reassured everyone that Morris does not bite and he is a non-venomous snake. She said after the program that one of her favorite things is educating kids about animals they normally don’t come in contact with.

“I just like introducing them to things they don’t normally see,” said Walker. “Just exposing them to animals that are both native and non-native to Alabama.”

At the end of the program, all the kids got to come up and touch the snake and different animals and get their pictures made.

The Helena Summer Reading Program has two weeks left that includes a visit from the McWane Science Center on July 15 at 10 a.m. and 2 p.m. and the end of summer reading party will be held on July 22 at 2 p.m. at the library.