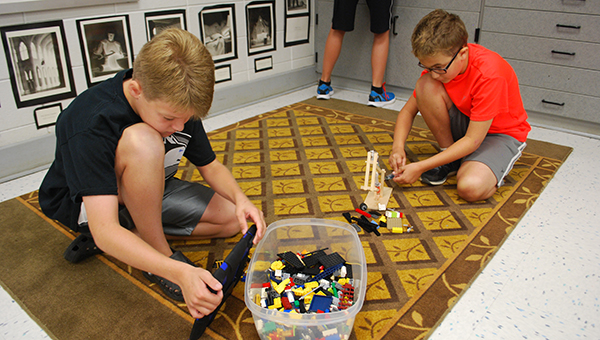 Upcoming sixth grader Aaron Surcouf (right) tests his completed excavator project to see how it works on Wednesday, July 8, at HIS during a Camp Build Enrichment Camp. (Reporter Photo/Graham Brooks)

The excavator had different liquid-filled syringes to act as hydraulic levers to move the arms up and down when pressed, much like a real excavator.

Over the course of the four days, students completed multiple projects for three hours each day, and also had recess and a snack.

The cost of the camp was $100 for the week and the projects included building a cherry picker, excavator, scissor lift, platform lift and projects with legos.

“It’s fun teaching kids who are interested and motivated,” said Miller. “This camp is sponsored through the Shelby County Summer Camps and it’s all about building and making things.”

The majority of the students were having a lot of fun putting the excavator project together and seeing the project come along step-by-step.

Miller was kept busy answering questions and helping the students along the way if they encountered any problems.

Eventually, Aaron Surcouf, an upcoming sixth grader, was the first to complete his project and showed off how the excavator could use the arms to bend down and pick up legos.

Other enrichment camps that were offered this summer in Helena included art, chess, space and karate camps.

Giangrosso takes the helm as principal of Spain Park