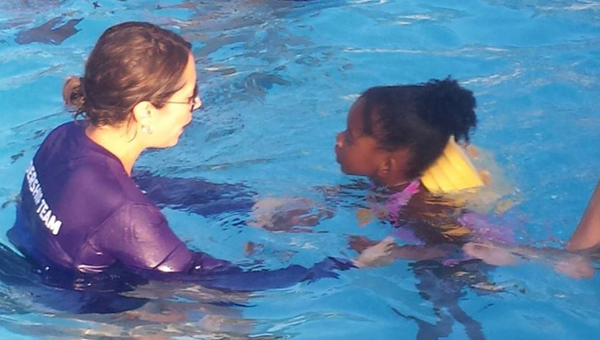 A Life guard give swim lessons at the Pelham YMCA aquatics division. (Contributed)

PELHAM – The Aquatics division at the Pelham YMCA has been the centerpiece of the summer season since its inception. For many years, Jennifer Dick was the Aquatics Director and the glue that held it all together. However, this summer has marked a time of great change as its leader has swum for different waters. Dick recently accepted a similar position in Seattle. Those helping to fill the large void left in this vast department are; Shaina Cid, Daniel Wertz and Kori Fulford.

Cid has worked at the Pelham branch for three years and started out as a life guard. She now has risen to the rank of Head Aquatics Coordinator, bearing most of Jennifer’s former responsibilities. Cid handles all the hiring and recertification procedures along with overseeing that the department is running smoothly. In fact, she insisted the program has not missed a beat since Dick’s departure.

“The department is thriving. Swim lessons are up, swim team numbers are up and we’re doing better in swim tournaments,” she said.

As important as Cid has become to the program, she has no plans to become the next Jennifer Dick. “I’m just a college student doing this. I’m happy to help while I’m here. I’m actually studying Pre-Med at UAB and plan on becoming a psychiatrist,” she said hopefully.

Daniel Wertz is in his fourth summer and also started out as a lifeguard. “I am the evening lifeguard coordinator. I put the life guards in position to do their jobs correctly and I handle complaints and pool maintenance issues” he said.

Then there is Kori Fulford, who primarily handles the swimming lessons, which boasts a current number of 150 students.

Fulford does not underscore her or her team’s pertinent role and what it means to the YMCA. “We lifeguards are in charge of safety for a whole branch. We take care of all our patrons. I personally think this alone brings in a lot of people during the summer,” she said.