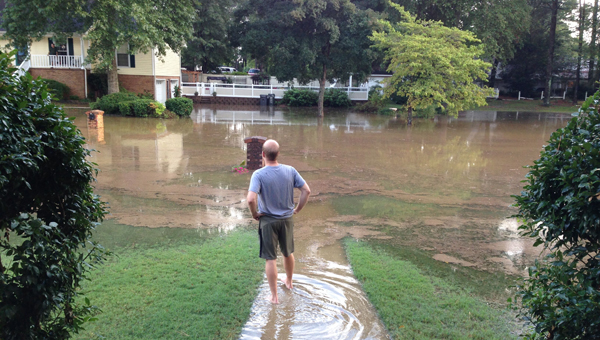 When it rains heavily, Chris Conner said it’s like a river flowing through the road and his front yard spanning several houses. (Contributed)

PELHAM— A solution to the flooding issues along Bearden Road might have been found, according to a Bearden Road drainage study. Chris Eckroate with Goodwyn, Mills and Cawood gave the Pelham City Council an update on the study at its meeting July 6.

“Our primary goal is to look at issues on the Living Hope Baptist side, the west side, of Bearden Road,” Eckroate said. “We identified a couple places and a couple things we could do to change out there that might help with the flooding that is occurring.”

One of the affected communities included in the study was Cedar Cove Subdivison. One of its residents, Chris Conner, was also at the meeting to provide some input as someone dealing with the problem first-hand. When Conner and his family moved into Cedar Cove in November 2013, they thought they asked if their house was in a floodplain area, and technically it isn’t.

Prior to them moving into their home, it hadn’t flooded there in two years. Then four days before his son was born, April 7, 2014, Conner experienced his worst flood.

His wife was pregnant, they had a full house and they were ready to head to the hospital any time when the heavy rains started. Conner said he was so nervous about the rain that he couldn’t sleep that night, and at 3 a.m. police even showed up to close the road in front of his house

When it rains heavily, Conner said it’s like a river flowing through the road and his front yard spanning several houses.

“I mean a river flowing like my son cannot stand in it because it has a current,” Conner said. “The drain cannot handle the water flow, no drain can.”

The Conners’ neighbors across the street have experienced between $80,000-100,000 worth of damage. They’ve lost three vehicles and he’s renovated his basement/man cave three times already, with most of the cost coming out of pocket.

“Yes the garages are flooded, but there’s also hundreds of thousands of dollars lost in property value and property,” Conner said.

Eckroate explained that the problem is the cross drainpipe under Bearden Road. It is currently set high, causing flooding in some of the properties in Cedar Cove. He said that a retention pond needs to be excavated in the Living Hope Baptist Church field, and a pipe needs to run down Bearden Road into Bishop Creek.

“What that would do is lower the water surface elevations that these properties are currently seeing,” Eckroate said. “It would also have water flowing out of that pond down to Bishop Creek and not into Oak Mountain Estates causing any downstream flooding issues there.”

“(This getting fixed) is huge for us because then we could drive up the property values of the neighborhood and reach what we paid for the house,” Conner said. “All of the study is pointing in the right direction. I think they are doing a good job with it, and I’m happy with the mayor’s response. I’m just ready for some resolution on it.”