ALDOT preparing to repave I-65 northbound 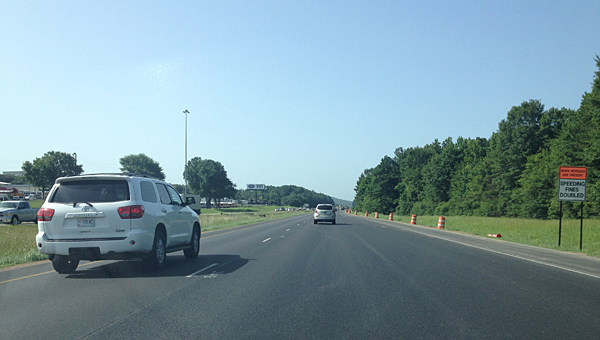 The Alabama Department of Transportation recently completed a repaving project on the southbound lanes of Interstate 65 between Alabaster and Pelham. (Reporter Photo/Neal Wagner)

The Alabama Department of Transportation is preparing to move to the second phase of its Interstate 65 repaving project between Alabaster and Pelham, and is planning nightly lane closures over the next few weeks.

ALDOT engineer Gary Smith said crews are preparing to begin preliminary work on the northbound lanes during the week of July 13-17 before moving on to the resurfacing portion of the project.

ALDOT recently finished repaving and conducting other repairs on the southbound lanes and on-ramps between Exit 242 in Pelham and Exit 238 in Alabaster. Smith said it took ALDOT about three weeks to repave the southbound section of the project, but said the northbound lanes will require more extensive prep work before repaving can begin.

“We have a good bit of prep work that has to take place first,” Smith said.

ALDOT has been planning to repave the section of I-65 for “two-to-three years” after its road review division identified the road was in need of attention. Smith said the majority of the prep work on the northbound side will involve correcting the road’s cross fall, which allows water to properly drain off the road.

According to an ALDOT road advisory, the repaving project likely will be totally completed by mid-November, and will include new bridge rails and a traffic detection pole.

While work is under way, ALDOT will hold lane closures regularly from 7 p.m.-5 a.m. from Sundays-Thursdays and from Fridays-Saturdays from 9 p.m.-8 a.m.

Thousands pack Helena Amphitheater for Jazz in the Park