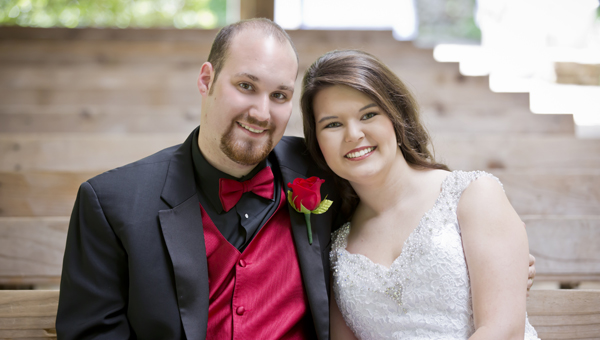 Emily Nicole Connell of Clanton, Ala., and Robert Andrew Klein of Calera, Ala., were married at the Alabama 4H Center Chapel in Columbiana, Alabama on May 23, 2015.

The 4 p.m. ceremony was officiated by the Rev. Tony Smitherman of Clanton, Ala.

A reception followed at the Alabama 4H Center Pavilion.

The bride is the daughter of Sandra and Wilburne Connell of Clanton, Ala.

The bride’s grandparents are the late Lois and Oscar Smith Jr. of Coopers, Ala., and the late Audie Mae and James G. Connell of Clanton, Ala.

The groom’s parents are Beverly and Charles Klein of Jemison, Ala.

The wedding was directed by Pamela Baker, aunt of bride, and Lisa Higgins.

The bride was escorted down the aisle by her father and given away by her parents.

Brianna Baker, cousin of bride, of Thorsby, Ala., was maid of honor.

The groom was dressed in a black tuxedo with a black shirt, red vest and red bow tie.

Will Clark, friend of groom, of Jemison, Ala., was the best man.

The groomsmen were Ethan Connell, brother of the bride, Clanton, Ala; and Tim Harris, friend of groom, Tuscaloosa, Ala.

Leighton Connell, cousin of the bride, and daughter of James and Courtney Connell of Clanton, Ala., was the flower girl.

The ring bearers were Lawson and Peyton Chancellor, cousins of bride and the sons of Bethanie Chancellor and the late Michael Chancellor of Jemison, Ala.

The bride and groom were honored by the attendance of friends and family.

Music, food and dancing were enjoyed by all at the reception.

The evening was completed for the couple with the bouquet toss and flipping the garter to the respective ladies and gentlemen.

Mr. and Mrs. Robert Klein enjoyed their honeymoon in Florida and will now reside in Shelby County, Ala.