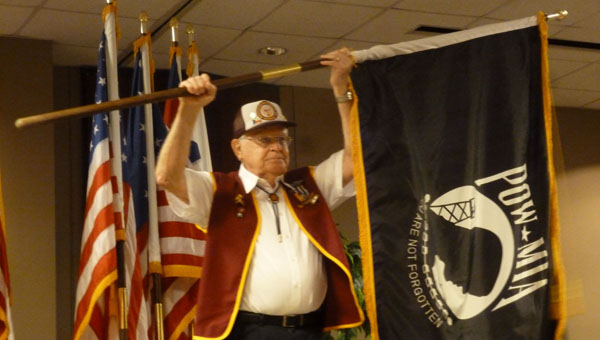 Korean War veteran Newton Duke carried the POW/MIA flag at the Seventh Annual Flag Day, sponsored by the City Of Pelham and Cahaba Valley Elks Lodge 1738. Corp. Duke, U.S. Army, served in the 23rd Infantry, 2nd Division, I Company and was captured by the Chinese on May 18, 1951. He was a POW for 27 months until his release on Aug. 13, 1953.

“Freedom is not free,” said Korean War Veteran Newton Duke of Alabaster, who was imprisoned by the Chinese for over two years at Camp No. 3 Ch’ongsonjin on the China/Korea border.

Duke carried with great pride the POW/MIA flag at the recent Flag Day Patriotic Celebration, sponsored by the City of Pelham and Cahaba Valley Elks Lodge, representing all prisoners of war and those still missing in action.

Duke enlisted in the U.S. Army in May 1950. By the time he finished infantry training, he was shipped to Pusan, Korea, on Nov. 22, 1950, given a BAR rifle and boarded a train for combat in 50 degrees below zero weather.

Duke was in the 23rd Infantry, 2nd Division, I Company.

For the next 96 days, Duke was in relentless combat.

He did not shave, had no hot food, wore same clothes and ate snow for water.

After six months of combat, Duke was captured during the No Name battle by the Chinese on May 18, 1951, when his unit ran out of ammunition.

“Before my lieutenant died, he told me to take charge of our unit,” said Duke. “I was the oldest man and a corporal. I asked the Chinese to let me take the wounded back to the no man’s land for help. I drove the wounded back in a truck, used my white T-shirt as a flag, left the wounded and went back for I knew they would kill my men if I did not return. One of those soldiers wrote my mother and told her he saw me alive.”

The POWs began the march to the Yellow River at the Chinese border.

“If you fell, they shot you,” said Duke. “The march was bad but the camp was worse. We lived in mud huts and had no medical care. All we ate was a few sliced turnips mixed sorghum seed. Over 62 percent of the men died. I went from 186 to 96 pounds in over two years. We wore the same clothes every day, had no bathroom breaks and had to go in our clothes. We were covered in lice. I was my squad leader and was tortured; but the hunger was worse than the torture. Your guts just eat your body up.”

After the signing on the Armistice, Duke walked across Freedom Bridge on Aug. 13, 1953, after 27 months as a POW.

“The only possession I brought back was the spoon that I ate with and that I used to bury the dead.”

Duke was wounded eight times in captivity. He was finally awarded the Purple Heart on Dec. 1, 2000, for his wounds received in action, over 50 years later.