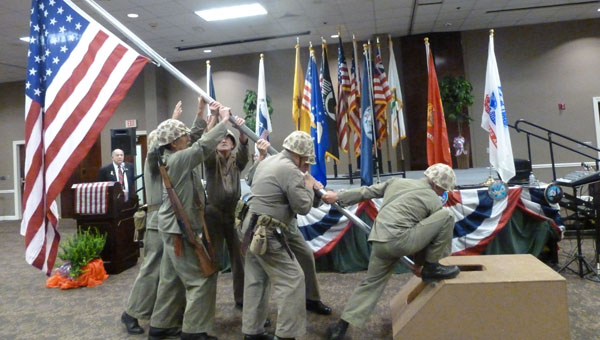 The SeventhAnnual Flag Day Patriotic Celebration, sponsored by the City of Pelham and the Cahaba Valley Elks Lodge No. 1738, was held June 14 at the Pelham Civic Center.

“Heredity allows us to pass many things down to our children; patriotism is not one of them,” said Mayor Gary Waters, City of Pelham. “Patriotism must be taught. Our children, friends and neighbors will only learn to revere, love and pay tribute to our flag, if we give them something to emulate. It’s up to us. William Faulkner wrote: ‘We must be free not because we claim freedom, but because we practice it.’ Together let us practice our freedom today. God bless America and the flag that flies above us all.”

All attendees received a laminated sheet with information to show proper respect as well the history of the U.S. flag.

Emcee of the program was the Rev. Mark Wadley, Riverchase United Methodist Church.

Patriotic music was sung by the musical trio Homeland.

The evolution of the U.S. flag was told through the history of the various flags that have represented the United States from the colonies to present day.

The flag folding ceremony explaining the 13 folds of the flag was presented by Boy Scout Troop No. 5, Christ Church United Methodist Church.

Miss Shelby County Outstanding Teen 2015 Tiara Pennington followed singing “Climb Every Mountain.” The program concluded with the reenactment of the raising of the flag at Imo Jima by the Marine Corps League and more music by Homeland.