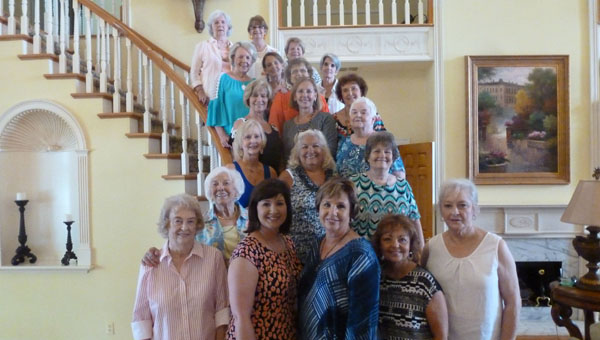 Linda Major of Columbiana was recently honored at a birthday luncheon celebrating her 70th birthday.

She is an active member of Columbiana United Methodist Church, member and past president of the AFWC-Alabama Vignette Club, and retired teacher of Shelby County College and Career Center where she developed the SUCCESS program.

Major and husband Evan, who was grand marshal of the Liberty Day Parade this year, have two children and four grandchildren.

The columned porches were filled with round tables decorated with fresh flowers designed by Jones.

The invitation, created by Fowler, was decorated with a painted honeysuckle:

“In June when the honeysuckle did appear,

Along came Linda – well, it was back a few years.

And now we are privilege to celebrate,

We will eat and drink, and soak up the sun,

“Linda is known for her culinary skills especially her delicious pound cakes and jellies,” said Falkner. “Every year for the last 20 years, Linda has baked a pound cake for my grandson David.”

“Linda is one of the most organized people I know,” said Fowler. “She even plans her vacations on her calendar!”

“Linda is a true friend from the word go,” said Goggins. “She has helped me so much through the years showing me to move on, the past is over.”

“Linda and Evan Major are two of the finest people I have ever known,” said Hall. “She is the first person to be there if you ever need help.”