Gothard reflects on service in Korea 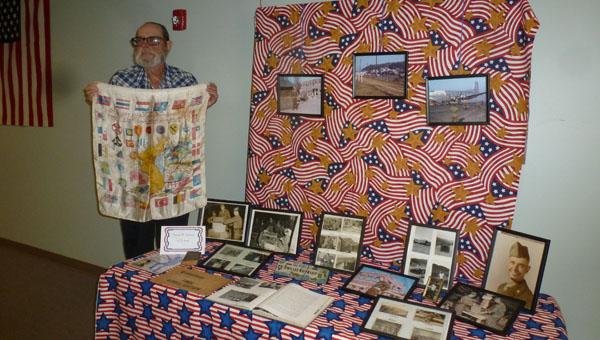 Army Veteran Don Gothard of Columbiana holds a silk hand-painted map of Korea which also displays the military units and countries involved in the Korea War at his display table in the Hall of Memories at the First Baptist Church of Columbiana on Liberty Day. Gothard bought the silk during his 16-month tour on the DMZ 38th Parallel at No Man’s Bridge between North and South Korea in 1954-1955. (Contributed)

The Korea War was raging, but life was good for Donald “Don” W. Gothard.

He had graduated from high school and gotten a good job with the L&N Railroad in 1953. But Gothard’s life was put on hold when he got the “call,” a letter from Uncle Sam telling him that he had been drafted into the U.S. Army.

Gothard was one of over 1.5 million men that were drafted during the Korea War.

“I did not mind being drafted,” said Gothard. “I think the majority of men felt it was their duty to serve. I know I did. I had been brought up in a good Christian home that loved our country. I think being in the military taught everybody to obey orders and respect authority. I think the draft was a good thing.”

The first peacetime draft was signed into law by President Franklin Roosevelt by establishing the Selective Service System as an independent federal agency by the Selective Training and Service Act of 1940.

From 1948-1973 during times of conflict and peace though WWII, Korea and Vietnam, men were drafted to fill the military that could not be filled through voluntary means.

In 1973, the draft ended and the U.S. converted to an all-volunteer military.

The Selective Service registration requirement for men was suspended from April 1975 to 1980 when President Jimmy Carter resumed registration.

As a draftee, Gothard “filed his age” with his place of employment which held his job till he returned from the military including no loss of seniority.

On Nov. 13, 1953, Gothard went to basic training at Fort Jackson, S.C., and then advanced infantry training as a machine gun operator.

He was deployed to Korea in March 1954 where he served 16 months with the 2nd Army Division on the 38th parallel DMZ, a two-mile wide area separating North and South Korea.

“I would spend three to four days at a time of the front lines,” said Gothard. “We were under a strict blackout using live ammo. It was tense all the time. Going overseas made me appreciate the freedom we have.”

Gothard returned home in September 1955, married Kyle Lyon the following year, and moved to Columbiana where the Gothards raised their four children, 10 grandchildren and eight great-grandchildren.