New head coach of volleyball for Thompson High School and overall volleyball director for the Alabaster City School System, Judy Green has been a well-known name in our area since 1986 when she came to the University of Montevallo in a coaching position which she would maintain for nine years. 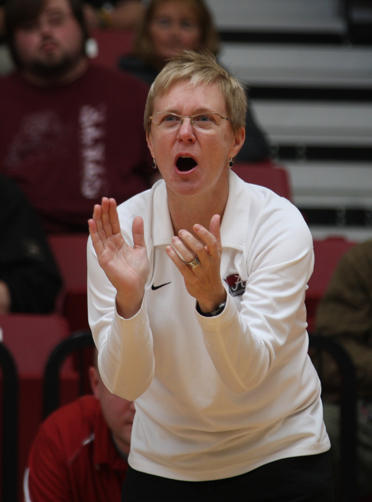 Green is a native of Lake Junaluska, N.C., where she attended high school and nearby Western Carolina University.

She received her M.A. degree in physical education in 1985.

An all-around athlete, Green played and excelled in not only volleyball but basketball and softball too.

After Montevallo, Green had a very successful 15-year stint at the University of Alabama as head volleyball coach, where she retired as one of the all-time great volleyball coaches at that institution.

She later had a three-year term in a similar position at Birmingham-Southern.

The hiring of Judy Green is being looked on as a very positive move by both members of the school board and students in the Alabaster school system.

Green grew up playing sports and following her dad’s fast pitch softball team around as the batgirl.

Nowadays she loves to do volunteer work.

Green volunteers at various soup kitchens around the area, was the course marshal for the Rumpshaker 5K road race, Habitat For Humanity, Hands on Birmingham and Light Up the Night (Leukemia Society).

Green has also conducted volleyball clinics and camps all across Alabama.

A worldwide traveler, Green lists the Czech Republic, Slovenia, Austria and Germany as some of her favorites.

She’s been skiing in Austria and hiking and biking in the Czech mountains.

“I love teaching the game of volleyball along with life skills to young student athletes,” she said. “It keeps me young at heart, and I enjoy building those relationships that will last a lifetime.

“My family makes my day everyday as well as receiving random positive thoughts for the day. I can’t wait to be a Warrior for the rest of my coaching career.”