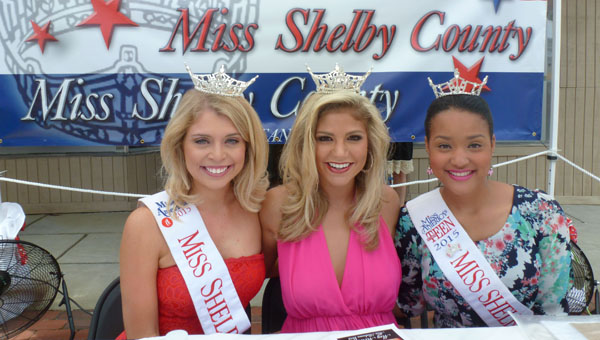 The two pageants combined in 2011 and are preliminary pageants in the Miss Alabama/Miss America Organization.

Tickets are $15 per person, which includes the pageant program.

All ticket and program advertisement proceeds go back to the community projects.

Over $5,500 was given back to the Shelby County schools and other non-profits last year.

The Miss Shelby County Pageant is one of the first appearances of the newly crowned Miss Alabama.

McGuffin, an Auburn graduate from Ozark, is the first former Miss Alabama Outstanding Teen 2007 to be crowned Miss Alabama.

Her platform is “Healthy is the New Skinny,” emphasizing positive body images for today’s youth.

“I have wanted to be Miss Alabama since I was 6 years old,” said McGuffin. “This is my dream job.”

This year, beloved Vignette Joyce Reach Smith died of cancer. In her memory, the Vignette Club will sponsor the new Miss Congeniality Award, a $200 cash scholarship, and the University of Montevallo is also awarding a $1,000 book scholarship to Miss Congeniality. In addition, Montevallo has increased its scholarships this year with four-year renewable scholarships: winner, full tuition; first runner-up, $2,000; and second runner-up, $1,000. Last year Miss Shelby County gave the fourth greatest amount of scholarships in the preliminary Miss Alabama Pageant system, over $31,300 in tuition, cash and gifts to winners.

The Sonya Lefkovits Community Service Award ($500) is given to the young woman whose life reflects the selfless life of the late Columbiana community leader, Vignette charter member and 2nd Vignette president.

Ford was the recipient last year and won the Impact Award for Community Service at Miss Alabama 2015.