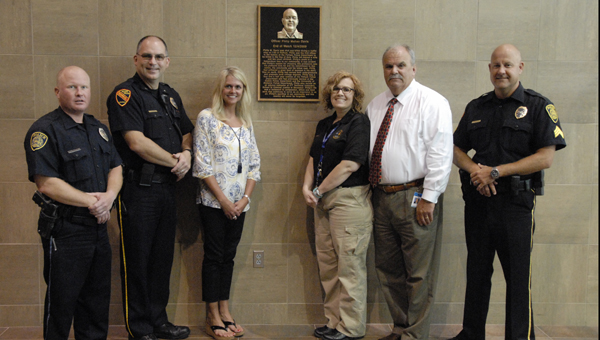 PELHAM—To commemorate the life of Officer Philip Mahan Davis, the Pelham Police Department and the Philip Davis Foundation created a bronze plaque to mount to the wall of the department’s lobby.

Davis, who passed away Dec. 14, 2009, was the first officer in Pelham’s history to be killed in the line of duty.

“It’s a way for us to honor our brother and to honor those officers,” said Pelham Police Chief Larry Palmer. “Philip was a big safety conscious guy and not only watched himself but also watched over other officers. He did a safety briefing every month, and he was a team captain of his shift.”

It was right before midnight when Davis stopped a car that was speeding on I-65. He was shot and killed during that traffic stop. Palmer said that traffic stops are dangerous situations where many police officers are killed.

The man who shot Davis is still on death row, attempting to appeal his case. All attempts to this point have failed.

“We still miss him and it’s a way for us to honor him, never forget him and never forget what he contributed to each of us, to this city and to this profession,” Palmer said. “(He was a) great guy. It’s sad and I try to remember some of the good things about Philip.”

He fondly recalled Davis’ sense of humor, stating that, while Davis was a jokester, you had to get to know him pretty well before you understood his brand of humor.

“Not long before he was killed, he was in my office and he was always cutting up with me,” Palmer said.  “I will remember that day as long as I live. He was a great guy.”

Davis left behind a wife and two children. Palmer said his family was very important to him, along with his love for his community. He was a four and a half year veteran of the Pelham Police Department and had previously worked at the Calera and University of Alabama police departments. He also served as an adjunct instructor at ITT Technical Institute’s school of criminal justice in Bessemer.

The plaque, which was mounted in the lobby a couple weeks ago, has a bronze rendering of Davis at the top. Palmer said they meant to have the bronze completed by Police Memorial Day, but was delayed. The first time Pelham received the rendering Of Davis, it was inaccurate, so the department sent it back to be corrected.

The last two lines of the plaque read, “Philip’s life was a testament to compassion, ethics and hard work that continues to serve as an inspiration to us all. Philip’s sacrifice to our community and this country will never be forgotten.” Palmer said those two lines are true to this day.

“It was a tremendous loss to our community. He had great love for his community and fellow man.”