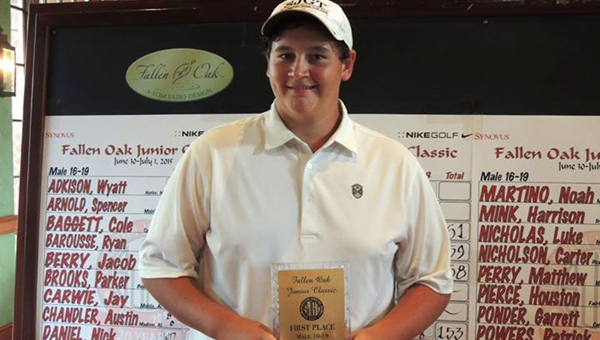 Chandler Pulliam first beat his dad on the golf course when he was about 13 or 14, he believes.

“He’ll probably say it was last year, but it wasn’t,” Pulliam said with a chuckle during a July 13 phone interview. “That was special for both of us when I beat him for the first time.”

Pulliam is a golfer through and through. He first picked up the game when he was about 8 years old, due to the influence of his dad and family, and plays at the Mountain Brook Country Club, where his family are members, as often as he can. His lowest round is a 68.

As he progressed as a golfer, he played in a handful of tournaments on the Southeastern Junior Golf Tour as a 14 and 15-year-old, five or six by his count. He was always competitive, but never had the opportunity to win a tournament. He simply enjoyed going to the tournaments and the opportunity to play on courses he would not have otherwise played.

Then, on June 18, Pulliam turned 16. Which meant he moved up an age group to the 16-19-year-old division, a much more competitive and mature level of golf. In his first tournament since his birthday, and subsequently the first tournament of his new age group, Pulliam traveled with his father to Biloxi, Miss., to compete in the Fallen Oak Junior Classic.

After an opening day round of 75, Pulliam found himself in the last pairing of the day for the second and final day of the tournament. And, as he left the 18th green on the second day with a 73, knew he had sealed up his first JGT victory.

“I think I won by won,” Pulliam said. “I was in the final group to come in, so I knew when I came off the course (I had won it). It was special, just being my dad and me there, it was a special moment for sure.”

The rising junior at Indian Springs School stays humble about his accomplishments and talents, and said he just enjoys the opportunity to play a game he happens to excel at. Looking ahead, Pulliam would like the opportunity to play golf in college, potentially somewhere in the SEC (he’s always dreamed of playing at Alabama), but for now, he’s just focused on being a junior in high school.