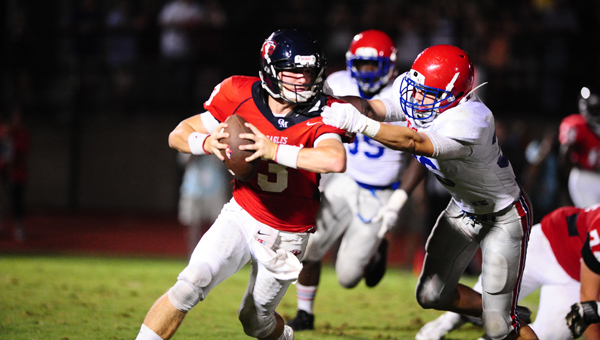 Warren Shader is back under center for Oak Mountain in 2015, and that’s good news for the Eagles. (Contributed)

Just like the Rocky franchise and J. Cole’s musical career, we’re back. Here we go with part six of the way-too-early football predictions. For this installment, we’re looking at the Eagles from Oak Mountain.

A year ago, Oak Mountain was one of the biggest surprises across the state. People like me projected the Eagles would win one, maybe two games in a 7A region containing Hoover, Spain Park, and Hewitt-Trussville. Instead, Oak Mountain ripped off a magnificent 9-1 regular season campaign and turned into a state power. Now, a year later, the Eagles don’t have the element of surprise on their side anymore, as fourth year head coach Cris Bell and his crew made sure of that last season. Now, on everyone’s radar, how will the Eagles respond?

The early guess? Quite well. Warren Shader is back under center, which is great news for an Oak Mountain offense that averaged 30.6 points per game. Shader threw and ran for over 1,000 yards last season, and directs the option-style Eagles attack deftly. He is not overpowering in terms of size or speed, but reads the field in real time better than most high school quarterbacks could dream of, and has a knack for turning small pinpricks of daylight into large chunks of yardage. Bell could not ask for a better quarterback to run his offense through, and Shader will carry the Eagles in 2015.

Alongside Shader in the backfield will be Daniel Salchert and Coleman Reeves. Salchert is a scat back type, small and quick, who can bounce off defenders effectively. Reeves saw a fair amount of action last season as well, and the two will round out a very potent Eagles backfield. With returning second team All-State center Justice Hammond up front as well, the Eagles run-dominated, option attack shouldn’t miss a beat in 2015.

On defense, the Eagles return six starters to a unit that gave up 23.8 points per game last season. Payton Youngblood, a two-sport stud for Oak Mountain, will be back at safety to roam the open field, while Josh Jones will lead the linebacking corps.

Oak Mountain won more games in 2014 than it ever had before. The only loss in the regular season the Eagles suffered was to eventual 7A state champion Hoover, which came via a nasty 35-0 loss in week three. With Hoover potentially in a rebuilding year, the time has never been better for the Eagles to strike at Goliath.

Way-too-early prediction: Teams are more prepared to handle Oak Mountain’s offense, but it doesn’t matter. Bell has proven himself to be one of the best in the game, and will have his boys ready to handle the added pressure of the spotlight. The Eagles repeat the regular season result of 2014 with a 9-1 record, but punch their ticket to the state championship game this season, where anything is possible. Look for Oak Mountain to be the last team standing in Shelby County in 2015.