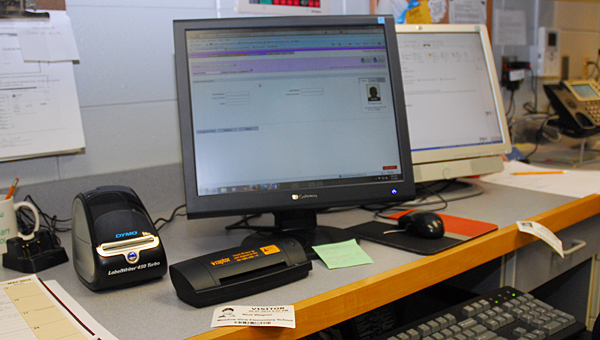 The Raptor system has been in place at Alabaster’s Meadow View Elementary School for more than a year. (File)

ALABASTER – Four more Alabaster schools will become more secure during the upcoming school year after the city’s Board of Education voted to expand the Raptor security system during a July 13 meeting.

The School Board voted unanimously during the meeting to spend $9,656 to expand the Raptor security system to Creek View Elementary, Thompson Intermediate, Thompson Sixth Grade Center and Thompson Middle School.

Through the Raptor system, school staff members are able to track and monitor all visitors at a school.

Front office staff members use a camera system to view the visitor before granting them access to the front office. Once the visitor arrives in the office, the visitor provides a photo ID card, which is then run through multiple databases through the Raptor system to ensure the visitor is allowed on school property.

The web-based Raptor system also allows the school resource officer and school administrators to access the database and user information even if they aren’t at the school.

Once cleared by the databases, the system then prints out a personalized name tag displaying the visitor’s photo and areas of the school they are authorized to visit.

“I think it will be a great safety measure for our kids,” Alabaster School Superintendent Dr. Wayne Vickers said while recommending the School Board approve the system’s expansion.

Meadow View Elementary School has had the system since the spring of 2014, when the school’s parent-teacher organization funded the purchase and installation of the Raptor system at the school.

Once the Raptor system is expanded for the upcoming academic year, all Alabaster schools except Thompson High School will have the program in place. Vickers said the system may one day be added to THS, but said the number of visitors the school receives as a potential hurdle.

“The high school gets so many visitors and students going in and out every day,” Vickers said. “We will use the next school year to see if it’s possible to add it to the high school.”

School Board President Adam Moseley said the system will give him greater peace-of-mind when sending his children to school.

“As a parent of students in some of those schools, it’s nice to have that extra measure of security,” Moseley said.