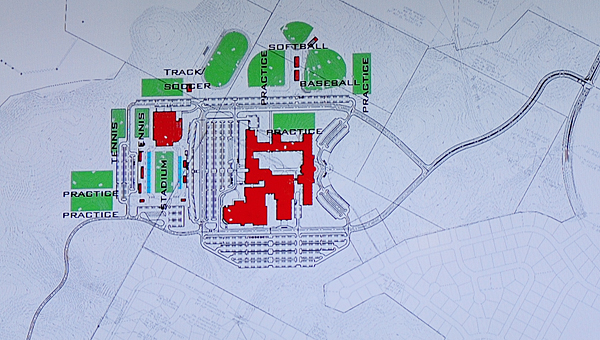 ALABASTER – Once Alabaster’s new high school is completed, the school’s sports teams will have much more room to practice and compete, as the new campus will include a total of 15 sports-related facilities.

While revealing the proposed layout of the new school, which is set to open in the fall of 2017 on a portion of 300 acres between Kent Dairy Road and Thompson Road, representatives from the McKee and Associates architectural firm detailed the campus’s sports facilities.

As presented during the meeting, the campus will include five standalone practice fields, a baseball field, a softball field, a standalone track and soccer complex, two standalone tennis court areas and a football stadium in the areas surrounding the school building.

In addition to the athletic facilities, the new school will also include several academic and extracurricular offerings, according to McKee and Associates architect Seawall McKee.

The new facility will be about 385,000 square feet, will initially be built to house 2,000 students and will be constructed with future expansions in mind, McKee said. The school will include 74 classrooms, 14 science lab classrooms, a 1,250-seat auditorium, a 150-seat black box theater, a 32,269-square-foot career academy and a 100-seat lecture hall.

The school campus will feature access roads on Kent Dairy Road slightly west of the Kentwood subdivision and on Thompson Road northwest of the South Wind subdivision.

Alabaster School Superintendent Dr. Wayne Vickers said the new school will be the “first comprehensive high school built around here in a long time,” and said it was designed with input from teachers and the community.

“We put a lot of effort into designing the facility the right way,” Vickers said. “I’ve built a lot of schools, but I’ve never been more excited than I am for what we are about to build.”

Church of the Highlands partners with IES for Serve…