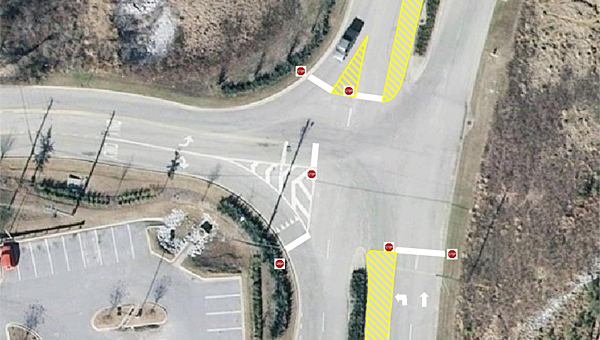 Alabaster is preparing to make several changes to the intersection of Alabaster Boulevard and Jimmy Gould Drive near the Jim ‘n Nick’s subdivision. (Contributed)

During a July 13 pre-meeting work session, the Alabaster City Council reviewed plans to make multiple changes to the intersection in an effort to make it safer.

Alabaster Boulevard’s current southern terminus is the Jim ‘n Nick’s restaurant, but traffic traveling north from the restaurant’s parking lot is given the right-of-way. Vehicles traveling south through the intersection are given a yield sign, even for through traffic.

The intersection currently features no on-pavement arrows to indicate the flow of traffic on Alabaster Boulevard.

While the intersection has not seen a high number of vehicle wrecks, Ward 1 Councilwoman Sophie Martin said the city is looking to take proactive steps in the name of safety.

“Something does need to be done. I travel that intersection four or five times a day, and there have been quite a few close calls,” Martin said. “It’s obvious there is some confusion.”

Alabaster is preparing to fund the addition of five stop signs at the intersection, and is planning to move the current stop sign on Jimmy Gould Drive several feet closer to the intersection.

The project likely will cost about $6,000, and likely will be completed in six to eight weeks, Henry said.