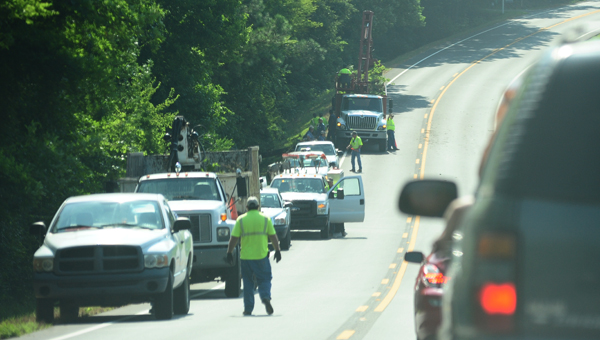 Shelby County crews work to remove a tree from the westbound travel lane of Shelby County 26 on the morning of July 15. An overnight storm downed several trees and caused damaged in parts of Shelby County. (Reporter Photo/Neal Wagner)

High winds caused minor damage to some homes in Pelham, and downed several trees on Interstate 65 in Alabaster, according to local residents and officials.

A severe thunderstorm struck parts of Shelby County on the night of July 14, bringing with it high winds, frequent lighting and heavy rains.

According to Alabaster City Manager George Henry, city crews assisted the Alabaster Fire Department in clearing multiple trees blown into a southbound travel lane of I-65 near the 240 mile marker. As of 9 a.m., the trees had been cleared from the I-65 travel lanes, and had been moved to a grassy bank on the west side of the interstate.

The weather contributed at least one vehicle accident in the Camp Branch community, and winds blew down multiple tree limbs on Alabama 119, Weatherly Club Drive and Saddle Lake Drive in Alabaster, according to Henry.

The storm also knocked out power to the traffic lights at the intersection of Alabama 119 and Plaza Circle in Alabaster, prompting the city to urge caution in the area until power is restored. Traffic lights without power are meant to be treated as four-way stops.

Some Calera residents also reported downed trees and large limbs as a result of the storm.

In a post to ABC 33/40 meteorologist James Spann’s Facebook page, Pelham resident Brett Edwards reported winds had torn the chimney from the side of his house in the Stonehaven subdivision, had caused “extensive” roof damage and had blown out multiple windows 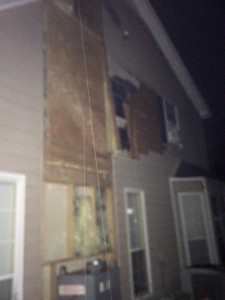 A resident in Pelham’s Stonehaven subdivision reported high winds tore the chimney from the side of his house and damaged multiple windows. (Contributed)