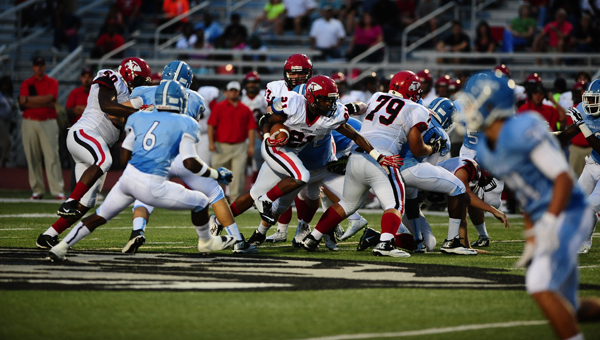 Rising senior running back Frank Mwaikajumba will be partially responsible with helping Thompson’s rushing attack move the offense in 2015. (File)

This installment of the way-too-early football predictions focuses on the Thompson Warriors.

Oh what a difference a year can make.

Everybody knows what happened in Alabaster a year ago. Thompson walked on to a football field 10 times, and got beat 10 times. The Warriors lost every game by an average of 20.5 points in 2014 and in general had as tough of a fall as could be imagined.

Now, roughly 10 months removed from the start of that forgettable season, the tone throughout Alabaster is incredibly different, thanks to one man. When Mark Freeman was tapped as the man to lead the colossal rebuilding effort at Thompson, the mood around the community turned on a dime. Freeman’s coaching prowess has been documented here and elsewhere, but deserves a slight overview. With six state titles and five undefeated seasons under his belt, and with a troupe of skilled, qualified assistant coaches around him, wins follow Freeman wherever he goes.

While Thompson may have found their man for the long term, how will his presence affect the here and now, with the remnants of a team that didn’t win a single contest last season? Let’s see.

The Warriors caught an immediate break after Freeman was hired, when Briarwood Christian’s two-year starting quarterback, Walker Lott, transferred to the Alabaster school district. Lott is big and fast, and can make just about whatever throw he needs to make. He has started consistently since his sophomore season, and brings a ton of game experience with him to the Warriors offense. Lott is undertaking quite a task in leading an offense that was held to 14 points or fewer for half of the season, but the Thompson coaching staff is sleeping easier knowing they have a proven leader under center.

Alongside Lott in the backfield of Freeman’s spread offense will be a cast of veterans. Seniors Frank Mwaikajumba and Darius Morton, both of who saw significant playing time last season, will be back along with junior return specialist Carlos Stephens. None of the three are particularly big, but all are reliable backs who can be counted on to help manage the offense.

The defensive unit boasts two of the most talented athletes on the team in TJ Rayam and Emmanuel Tait. Rayam, the defending 7A heavyweight wrestling champion, will be the anchor in the middle of Freeman’s 3-4 defense, and is a load to handle up front. The son of Alabama hero Thomas Rayam, famous for blocking the last-second, potentially game-winning field goal against Penn State in 1989, has football is in his blood. Tait on the other hand, will usually, if not always, be the fastest kid on the field. The defending 110 and 300-meter 7A state champion has started at cornerback since he was a freshman, and is a walking homing missile. Newcomer Austin Davis, who transferred in from Helena, has also impressed the coaching staff and will play an integral role in the defensive backfield.

The challenge ahead of Freeman and company has been well documented. In a region with Hoover, Oak Mountain, Spain Park, Tuscaloosa County and Hewitt-Trussville, the competition is as stiff as anywhere in the state. Freeman is a proven winner, but this is his biggest challenge to date.

Way-too-early prediction: Since 2007, Thompson football is 18-62 and has burned through four head coaches. That is bad. However high hopes and spirits are high for the long-term success of Thompson’s football program now, it’s going to take some time to turn this ship around. Freeman has pieces to make things interesting this season though, and for a coach of his caliber, that’s enough to get some wins. In Freeman’s first season, the Warriors will win more games than they have since 2006, and will finish the year 6-4, but are still a year away from the playoffs.