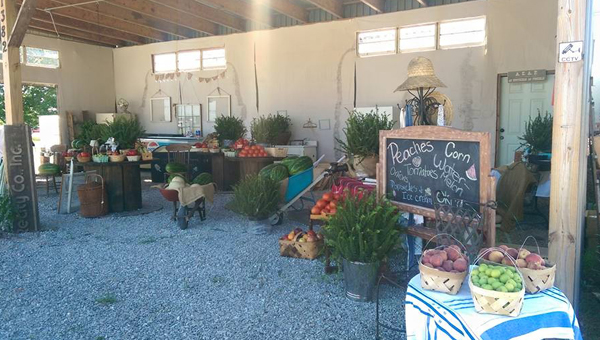 Sobia Mughal opened L&L Pinestraw in March 2015 and has slowly begun to add more and more variety to the products she offers. (Contributed)

CALERA— At the corner of U.S. 31 and County Road 22, a new storefront has opened between the cemetery and gas station. Visitors who stop by the shop will find they are quickly greeted by the smiling face of Sobia or Sadia Mughal and thier big, black-spotted dog, Lavender.

The shop is called L&L Pinestraw, a business that provides wholesale pine straw delivery and landscaping of any kind. It’s a lot more than pine straw, though, as Sobia and her daughter Sadia are selling hand-made market items typical of a farmers market setting.

“I want when people come from Georgia or Tennessee, (for) there to be a billboard out there and everybody to know to stop here to get fresh produce — to get this to get that,” Sobia said. “I’d like to move into that red building over there eventually.”

Sobia used to distribute cars overseas and she was away from her family frequently. Last year alone, she was away for nine months straight, and she remembers having to Skype them in order to keep in touch.

No one believed she would actually do it, but soon enough she called the distributer and told him to bring her some pine straw. From there L&L has grown a little bit every day, adding organic honey from Calera, home-grown tomatoes and all sorts of other fresh produce.

She doesn’t plan to stop there though. Whereas some vendors are seasonal, Sobia plans to stay open year round.

“There’s a dead spot for tomatoes and pine straw, so I had to think of what the next spot was going to be to keep this place open year round,” Sobia said.

The answer: A pumpkin patch and Christmas tree shop. She said she plans to incorporate more baked goods during the fall season, offering cookies, pumpkin bread and more, along with having a small pumpkin patch. Sadia is into photography, so they’ll have a photo booth for kids and families as well.

The same goes for Christmas time because Sobia plans on having Santa Claus and hot chocolate. She grinned wide as she spoke about the Christmas-themed tree shop.

“Would you just not think (it was so cute) if you were going to buy your Christmas tree and you could go somewhere where it looked just like that old-timey, city Christmas tree farm that sells the hot chocolate,” Sobia said.

The market will keep growing, and she will continue to add new products here and there. She said it’s an exciting time for her, and the sky is the limit for what she has in store.