Community center could be ready in September 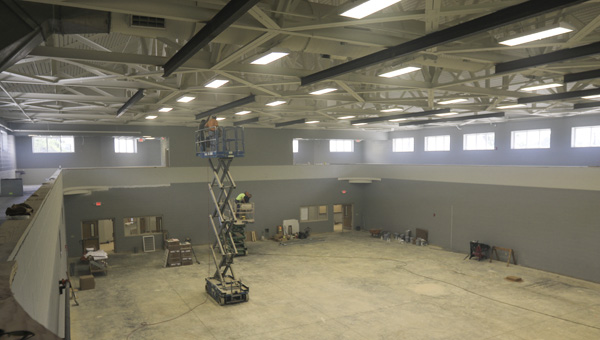 Crews work on the gym inside the Chelsea Community Center off Shelby County 47 on July 10. (For the Reporter/Dawn Harrison)

CHELSEA – The Chelsea Community Center off Shelby County 47 could open sometime in September if construction progresses on-schedule the next few weeks.

The center was originally set to open this summer, but construction delays have moved the open date to the fall, according to city leaders.

Crews are working to finish the 30,000-square-foot facility’s interior, including the floors and the gymnasium, where basketball goals will be added soon.

The gym’s seating will accommodate as many as 300 people. The overhead walking track wraps around the upper portion of the gym walls.

Appliances and a work island will be installed in the kitchen of the senior wing.

An exercise area will be outfitted with Curves equipment (treadmills, bicycles and more), and the community rooms can be reserved for group meetings and private events.

“This is not to compete with the health clubs around,” Chelsea Mayor Earl Niven said of the exercise area, noting it will not have weights.

Other features of the facility are a reception area and director’s office, a children’s nursery and an outdoor patio area.

Certain areas will be equipped with big screen TVs, computers, a sound system and Wi-Fi.

The last phase of the project will be landscaping, Niven said.

Niven said the city likely will establish a membership fee to help offset some of the facility’s maintenance and operation costs.

“If there is a membership fee, it will be small,” he said. “We’ve got to have something to offset some of the expense on this building.”

In a pre-council meeting on July 7, Councilman Tony Picklesimer mentioned the need for the council to decide on how the facility will be staffed.

“What I can envision is one person in the office full-time during the day,” Niven said.

The nearly $3.8 million project kicked off nearly a year ago.

“It’s going to be nice,” Niven said of the facility. “I want to see the entire community involved. This is a service to our people. They want it, and they deserve it.”