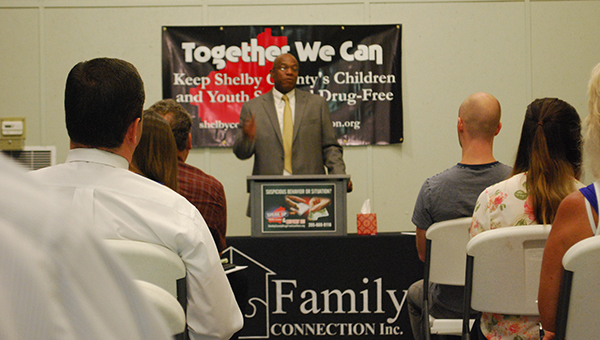 SAGINAW–Members of the Shelby County Drug Free Coalition were treated with a special guest speaker at their meeting on Thursday, July 16.

Former University of Alabama running back and current Bryant Bank public director Bobby Humphries addressed those in attendance by speaking on personal experiences and the impact an internship at a family court had on his life.

“When I finished playing ball in the NFL, I was encouraged by a counselor in Mississippi to go back to school,” said Humphries. “I finished up with a social work degree and one of the most encouraging things and biggest highlight of my career was doing an internship at a family court. I had a chance to influence a lot of those young people and that was one of the highlights. It wasn’t football, it wasn’t coaching or all the other things I did.”

Humphries spoke about the challenges the organization faces today on the fight against substance abuse and addiction among the youth.

“There’s a fight, and it’s a serious fight and I agree it’s getting worse,” said Humphries. “But the worse it gets, the more we have got to fight. But it’s encouraging to know that we’re all in this together and regardless of how great or how small, we’re still apart of a team. You never know, a person’s life you may be saving may be your own family member.”

Members from Bradford in-patient and out-patient services attended the meeting, as well as Emily Littrell of Shelby County Schools who gave an update of how successful the Character In Action Awards have been to the school systems throughout Shelby County within the past year.

The next SCDFC meeting will be on Thursday, Sept. 17.