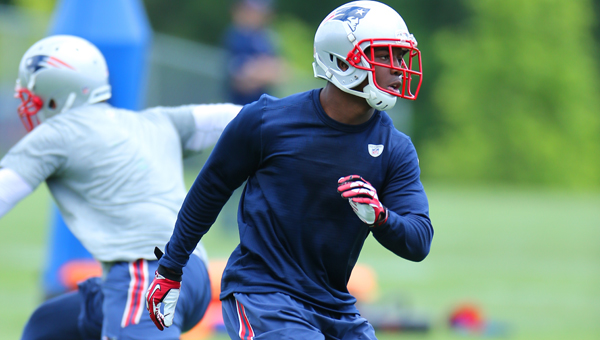 Brandon King, of Alabaster, goes through drills with the Patriots. (Courtesy of the New England Patriots/David Silverman)

It hasn’t been that long since Brandon King donned a Thompson Warriors football jersey. Now, barely more than four years removed from his high school graduation, King’s life is still consumed by football, only now he’s getting paid for it, as an undrafted rookie for the New England Patriots. King’s journey from Alabaster to Foxborough is marked by perseverance and his ability to adapt to his surroundings, and he took a minute out of his day to reminisce on the past, and speculate on the future.

King, who graduated from Thompson in 2011, remembers his time as a Warrior as being marked by change.

“We had to get used to a new system almost every year,” King said. “It was always something different. That actually helped me adjust to new systems quicker later on.”

At Thompson, King was a linebacker, but got the opportunity to play safety, which foreshadowed the mercurial, positionless defensive approach he would later adopt . His senior season stats for the Warriors were impressive in their own right, 116 tackles, 21 tackles for loss and four forced fumbles. However, King was not a highly touted prospect coming out of Thompson, and he decided to enroll in junior college after he graduated to help get his name out to larger SEC schools.

“I went to junior college to maximize my recruiting potential,” King said.

He became a standout safety for Highland Community College in Kansas, recording 118 tackles and six tackles for loss in his second season at the junior college, earning a scholarship to Auburn in 2013.

At Auburn, King embraced any and every opportunity to get on the field that came his way.

“Any opportunity to get on the field I took advantage of,” King said. “Whatever position I needed to play I’d play it.”

King saw action in every game in 2013 partly because of his attitude, and in 2014 moved from his safety spot to help improve the pass rush, according to his profile on Auburntigers.com. After graduation, King began the journey of preparing for the NFL draft. When he didn’t hear his name called from the podium during the three –day event in Chicago, King didn’t lose hope.

As fate would have it, professional football did come knocking, as the New England Patriots reached out to King and told him they were interested in having him come and try to earn a spot.

“They contacted me (after the draft) and told me they thought I was a good fit,” King said. “It was great to hear from them. Why not go somewhere where they instill the virtues I try and live by.”

Above all else, King has tried to make sure he doesn’t hurt himself in this process. He does not want to give any coach any off-field issues as a reason to overlook him.

“I’ve just wanted to put myself in the best situation to keep playing,” King said, “I didn’t want character issues or anything to be an issue. “

The NFL is, first and foremost, a business. Undrafted rookies like King know this more than most, and every day in the months and weeks leading up to the season are filled with uncertainty, as they could be cut at any time. Players are only guaranteed a spot for the season when they make the final 53-man roster in late August. For King, he can’t avoid thinking about the possibility of getting cut, because it is happening all around him, but he is counting his blessing instead of worrying about the future.

“People get cut all the time, cuts are going to happen,” King said. “I just feel blessed every day to see my name on that locker. I just take it day by day.”

Whatever happens moving forward, one thing is certain, the 22-year-old undrafted rookie from Alabaster is going to make the most of his opportunity.