Helena man charged with robbery over alleged theft of $20

COLUMBIANA–An 18-year-old Helena man has been released from jail after being arrested for an alleged first-degree robbery charge that occurred in the month of April. 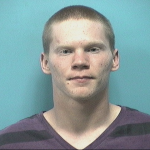 Timothy Michael Hales, who lists an address in the 1400 block of East Whirlaway in Helena, was arrested and charged with first-degree robbery on July 9.

According to Hales arrest warrant, Hales allegedly stole $20 in U.S. Currency from a victim on April 8 and “threatened the imminent use of force against the victim.”

During the alleged robbery, Hales was armed with a kitchen knife, which led to the first-degree robbery charge.

Hales was released from the Shelby County Jail, after posting bonds totaling $15,000 on July 10.

Hales is scheduled to appear in court for a preliminary hearing on Aug. 12 at 8:30 a.m. according to court documents.

First-degree robbery is a Class A felony and if convicted of the crime, Hales could face between 10-99 years in prison.