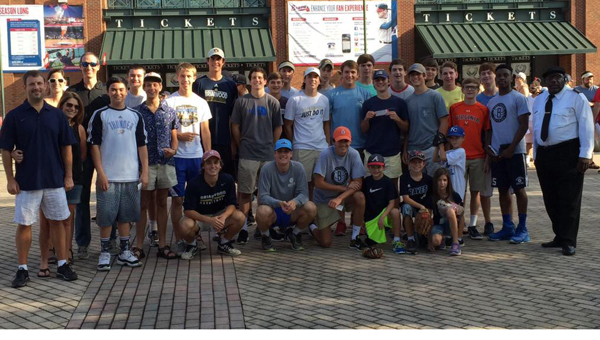 The Briarwood boys basketball team took a trip to Atlanta from June 19-21 to take part in a two-day camp at Georgia Tech and to take in a Braves game. (Contributed)

The Briarwood basketball team recently took part in a two-day camp at Georgia Tech from June 20-21, playing six games in total and getting an opportunity to play against some of the best teams in the Southeast.

“We played pretty good,” Bobby Kerley, second-year head coach for the Lions, said. “I was really pleased with how we performed. When you travel a pretty long way you never know what you’re going to get. Staying in a hotel and staying up late and getting up early, it’s just hard to know what to expect. I was really proud of our guys.”

The two-day camp at the Georgia Tech campus consisted of three games a day, but was broken up and preceded by fun. Kerley took his team to resident Atlanta culinary hotspot The Varsity, situated practically on Georgia Tech’s campus, in the middle of the camp and brought the whole team up a day early to go see a Braves game.

“We all went up there on the 19th on a charter bus and saw (the Braves) play the Mets,” Kerley said. “You talk about special, man. Just to get to ride in the bus for a couple hours.”

The Braves beat the Mets 2-1, scoring both runs in the bottom of the eighth to win the game in thrilling fashion. After the contest, there was a firework show that the team got to witness as well.

“It was nice to watch a really good game,” Kerley said. “And the fireworks after, that was a treat right there.”

The team stayed in a hotel on the outskirts of the Georgia Tech campus, and had the opportunity to bond there as well.

Kerley was specifically impressed with the play of Thomas Collier, a rising senior center. “He makes us an above average basketball team,” Kerley said. “We have great shooters and a really good big man.”

Kerley has been involved with the Briarwood program since he was in college and is moving into his 16th year with the team, 11th as a full-time employee. His Lions are practicing all through July, but Kerley is making sure to keep them light.

“The season can be a grind,” he said. “In the summer you want to make sure they have fun and want to come, not feel like they have to.”