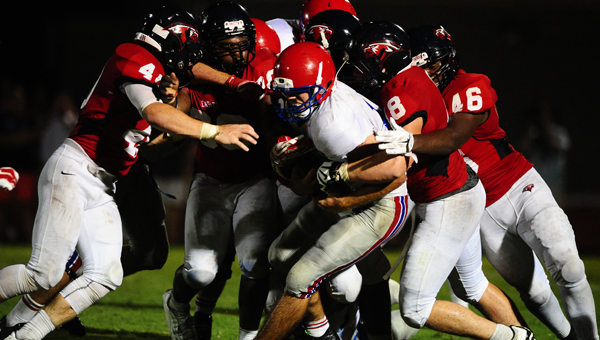 Riley Fowler, far left, will participate in the 2015 North-South All Star football game being held on June 17 in Montgomery. Fowler will play for the North. (File)

MONTGOMERY – Two Shelby County athletes will be representing their respective alma maters during the 2015 North-South All-Star game, which will take place on Friday, June 17 in Montgomery. Riley Fowler, graduate of Oak Mountain, and Moregan Sharp, graduate of Pelham, will make an appearance in the game. 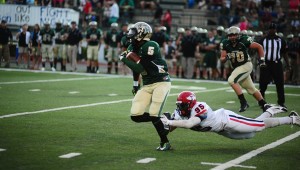 Moregan Sharp, 2015 Pelham graduate, will play in the 2015 North-South All Star game on July 17 in Montgomery. Sharp will be for the North. (File)

Fowler helped lead the 2014 Eagles to a 10-2 record, the best in school history, from his linebacker spot, and is listed as a 5-foot-11-inch, 205-pound defensive back on the North-South All Star roster. Sharp, Pelham’s running back last season, is listed as a 6-foot-2-inch, 200-pound running back on the same roster. Both will be playing for the North team, and were two of 75 athletes chosen from across the state to compete in the game.

Both teams are comprised completely of 2015 seniors, and were selected by a special coaches’ committee of the Alabama High School Athletic Directors & Coaches Association (AHSADCA). The game is being played one week prior to the 2015 AHSAA Summer Conference, held from July 21-25 at Montgomery’s Renaissance Hotel and Convention Center.

Both Fowler and Sharp have been added to the team since the initial rosters were released in May.

The NFHS Network will live-stream all six North-South all-star competitions, and a link to the competitions can be found at Ahsaa.com.