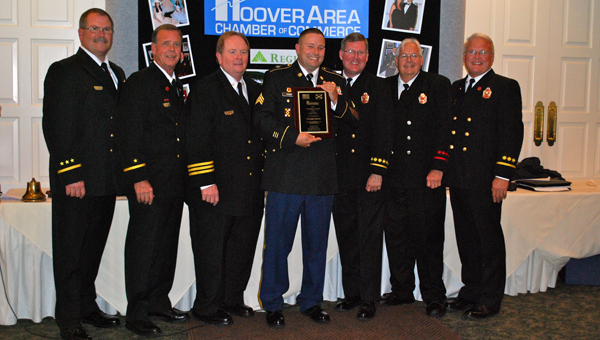 The Hoover Chamber Freedom Award was first granted in 2003. The award recognizes “Hoover’s most outstanding public servants who have dedicated themselves to the ideals of freedom,” according to the chamber’s website.

“When you look at all the different service men and women, when you look at firefighters, their process, their traits are designed to never give in,” Hoover Fire Department Battalion Chief and Chief of Operations Ben Allison said. “(Michael Thorin) has never given in at anything.”

Thorin spent nearly 20 years in the military, serving in both the Army and the National Guard from 1990 to 2009. During his time in the armed forces, he earned numerous medals, badges and recognitions. He also served in both Iraq and Afghanistan.

Thorin joined the Hoover Fire department in 2008. He was named the department’s 2014 Firefighter of the Year. Hoover Fire Department Executive Officer Rusty Lowe described Thorin as “outstanding” and “ready, willing and able to go above and beyond.”

After six years as a Hoover fire/medic, Thorin began experiencing health problems directly related to his service in Iraq during the Gulf War. He retired from the Hoover Fire Department in 2014.

Thorin, dressed in his army dress uniform, was presented with the Hoover Chamber Freedom Award by Hoover Mayor Gary Ivey.

“Man, I’m so excited to wear this uniform today,” Thorin said. “It’s the first time I’ve worn it in years, and it’s possibly the last time I’ll wear it.”

Thorin spoke about his military career, time as a firefighter and his family, noting throughout his life he has strived to be a good soldier, firefighter, paramedic, father and husband.

Thorin noted the importance of freedom, encouraging those in attendance to not take it for granted.

Thorin also discussed his worsening health. He was diagnosed with chronic multisystem disorder, also known as Gulf War syndrome, and was informed improvement “is not likely.”

“If you ask me if it’s worth it, the answer is a resounding yes,” Thorin said. “I have served with some of the bravest and most heroic people in the world, both in war and here in Hoover, Alabama.”