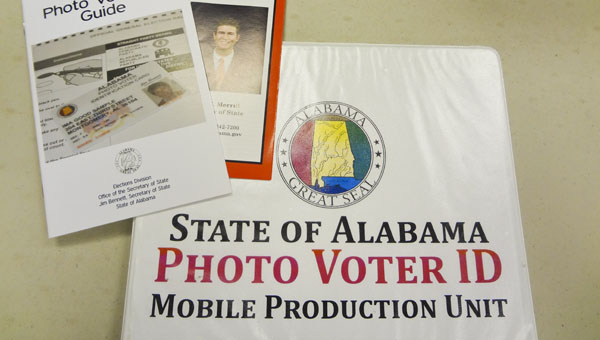 The drive was one of many scheduled this summer for each of Alabama’s 67 counties to give residents an opportunity to apply for and obtain a free photo voter ID card if they do not have some form of a valid photo ID, such as a driver’s license or non-driver ID card.

The Alabama Legislature ruled voters must present valid photo ID cards prior to voting starting with the 2014 primary election, making Alabama one of 34 states to require voter identification.

Clay Helms, supervisor of voter registration for Secretary of State John Merrill’s office, was on hand to help people through the application process for obtaining photo voter identification.

“If they are a registered voter, the process takes about 10 minutes,” Helms said. “We just do our best to notify the public. We want to be as effective as possible.”

In Shelby County, voter registration forms are available at the Board of Registrars office in the Butch Ellis Building, 180 West College Street, in Columbiana.

Voter registration forms can be downloaded from Shelbyal.com.

To view the mobile I.D. location schedule or for more information, visit Alabamavotes.gov.