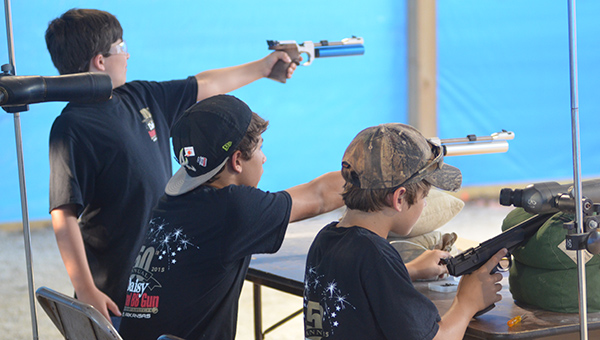 HELENA–Every Monday and Thursday for the majority of the calendar year, a group of talented junior rifle marksmen gather at a special shooting range in rural Helena to perfect their skills and prepare for upcoming competitions.

The group is called the Shelby County Shooting Sports Association consisting of kids ages 9-19 with the primary focus of the group being to promote firearm safety, marksmanship and training.

“Basically to get in the club a child has to attend a basic rifle course and that course covers all your rifle types, ammunition, safety, marksmanship and shooting positions,” said Richardson. “We are fortunate that Shelby County Sheriff John Samaniego allows us to come out and shoot cartridge guns out there and support us in that way. After they complete this eight-week class they can join the club and practice with us.”

Richardson also explained how far the club has grown with some impressive accomplishments.

“We’ve had three start with us and wound up getting college scholarships to shoot,” said Richardson. “We’ve had numerous compete at the Olympic Training Center at the National Junior Olympic Championships. We offer an opportunity for them to participate in shooting sports and go as far as they want to go.”

Will Stamps is an upcoming ninth grader who’s been with the association for four years and he recently finished second in a national competition.

“I started the sport in Cub Scouts and in October I’ll have been with this association for four years,” said Stamps. “It’s something I definitely plan to keep doing and hopefully get a scholarship at UAB or somewhere for it.”

Richardson enjoys helping and teaching the kids because he believes the sport can help the youth in other ways than just hitting targets.

“When you see these kids and they’re focusing on a shot, I heard somebody say one time that ‘if a kid focuses on a shot and develops his focus and that helps him do a math problem in school then you’ve done something,’” said Richardson.

This year, the rifle team has traveled all over the country and placed extremely well in most competitions that have taken place in Anniston, Kentucky, Ohio, North Carolina and most recently in Rodgers, Ark.

The club is nearing the end of the season but they are looking to eventually update their rifle range by installing a new floor, heating and air conditioning, ballistic walls and more once funding becomes available.