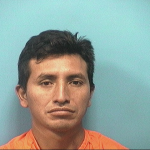 According to Pelham Police Chief Larry Palmer, deputies responded to the domestic violence call late the night of July 11, previous to Ardiano-Miranda’s arrest. During an altercation, the suspect allegedly began choking a female victim.

She was able to get away and reported the incident to the Pelham Police Department. Palmer said there were signs of strangulation on the victim, and deputies attempted to apprehend Ardiano-Miranda at his home.

At 7 a.m. the next day, officers found 37-year-old Ardiano-Miranda at his home and arrested him at that time. He was booked into the Shelby County Jail July 12 with a bond set at $10,000.

His preliminary hearing is set for Aug. 6 at 8:30 a.m. Domestic violence-strangulation is a Class B felony. If convicted, the suspect could spend up to 20 years in prison.