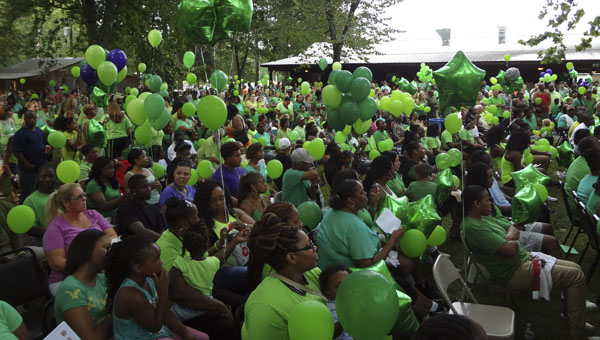 A candlelight vigil for Haleigh Green drew hundreds of people out to Shelby Iron Park in Shelby on July 18. (Reporter Photo/Emily Sparacino)

Donning green clothing, Green’s family members, friends, former classmates and community supporters came together under the park’s green tree canopy to celebrate the teen’s life with reflection and song just a week after her unexpected death.

“Today, we are not mourning Haleigh’s death,” Mistress of Ceremonies Elizabeth Hatcher said. “Today, we are going to celebrate her.”

Green was reported missing on July 7 after she failed to attend her classes at Lawson State Community College on July 6 and 7. Authorities located a body identified as hers based on dental records near her car in a wooded area in unincorporated Shelby County on July 11.

Preliminary reports from the Alabama Department of Forensic Sciences indicate Green was fatally shot, according to the Shelby County Sheriff’s Office.

The SCSO and other law enforcement agencies are currently engaged in an “active manhunt” for 19-year-old Demarcus Lamar Means, the suspect wanted in connection with Green’s death.

Hatcher, who graduated from Shelby County High School with Green this year, organized the vigil on July 18 to pay tribute to a friend who “wasn’t just a classmate.”

“She never met a stranger,” Hatcher said of Green. “She was a friend to everyone. She was such a joyous person. She didn’t want to see anyone sad.”

Shevelle Bivins, Green’s mother, thanked family and friends for their support and shared her thoughts about Means.

“We all want justice,” Bivins said. “I want each and every one of you to think about forgiveness. Some of you may not understand how I can forgive (Means). I’m not forgiving him for him; I’m doing this for me.”

Joseph Green, Haleigh Green’s father, also expressed his gratitude for people’s outpouring of support in the days since his daughter disappeared.

“Thank you to everyone in the community for coming out and doing everything you’ve done,” Joseph Green said. “For being there for us. We appreciate y’all, and we love y’all.”

Gerry Bivins, district elder at Bethesda Apostolic Worship Center in Montevallo, where Bivins and Haleigh Green attended church, noted the diversity of races and backgrounds represented in the crowd.

“This is not a Green and Bivins thing,” he said. “This is a Shelby County thing, a Shelby thing, a Columbiana thing, a Calera thing … Don’t let this just go to waste. Look at how we’re coming together.”

Other parts of the program included the Bethesda worship team singing Christian praise songs; Tracy Trice, another of Green’s former classmates and friends, reading poems; and a handful of Green’s relatives and close friends coming up to the microphone to share memories of her.

Those clutching green balloons released them into the sky.

Bows made of green ribbon donated by Main Street Florist in Columbiana adorned the park.

Singing continued as people lit their candles at dusk.

The program closed with the playing of “See You Again,” the song the SCHS class of 2015 chose as its class song.

“We’re still hurting, but God is going to see us through,” Gerry Bivins said. “We’re a family today. What happened is not going to divide us. This is going to make us stronger.”