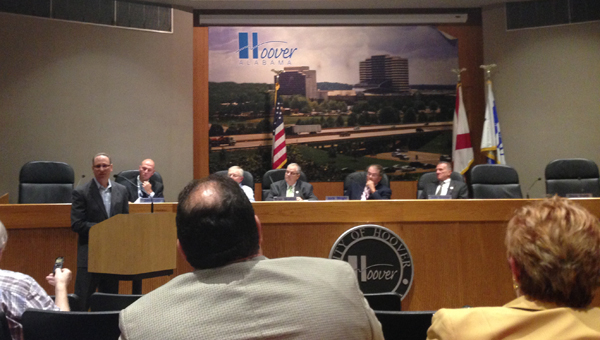 HOOVER—Numerous representatives from Hoover hotels were present at a July 20 Hoover City Council meeting to voice opposition to a proposed tax increase that would raise the municipal lodging tax from 3 percent to 6 percent.

The Hoover City Council unanimously voted to continue a decision regarding the lodging tax increase before listening to comments from the public.

“We do have some concerns with this ordinance,” Hyatt Regency Birmingham-The Wynfrey Hotel General Manager Dominic Buompastore said to the Council, noting the increase would put Hoover hotels at “a competitive disadvantage with other cities, neighboring cities and other markets…throughout the nation.”

Buompastore noted the majority of business at his hotel comes from meeting planners, many of whom use third party websites to determine and book the most cost effective hotels for business meetings. With the current lodging tax, Hoover is the “low cost option,” Buompastore said.

With an increase in lodging tax, Bumpastore said Hoover hotels could lose business to other cities.

“Tax makes a difference… It affects people’s decision to buy and to purchase,” Bumpastore said. “I urge the council to reconsider this… there’s got to be a different way to do this.”

“Customers these days don’t buy in the same fashion they used to,” Sharp said, encouraging the City Council to reconsider the tax increase.

“I think this additional amount represents the lodging community being a good citizen… (Hoover) needs that revenue,” resident Dan Fulton said in support of the tax increase. “I think you can manage a slight increase in tax on lodging. That’s just one citizen’s opinion.”

If the increase is approved, the overall lodging tax will be boosted from 14 percent to 17 percent.

Hoover’s current 3 percent municipal lodging tax brings about $1.2 million in revenue to the city each year. This number could double to $2.4 million in revenue if the proposed increase is approved, Councilman John Lyda said previously.

According to the ordinance, money generated from the tax increase will “be allocated and utilized by the city only for capital projects and/or debt service related to capital projects.”

The Hoover City Council heard a first reading of the proposed tax increase during a July 6 meeting, and was scheduled to hear a second reading and vote during the July 20 meeting.

Hoover City Councilman Brian Skelton noted the city’s “staff is still working on” the ordinance to increase the tax during a July 16 City council work Session, and made a motion to continue the decision during the July 20 City Council meeting.

The Hoover City Council will vote on the lodging tax increase during the August 3 regular meeting at 6 p.m.