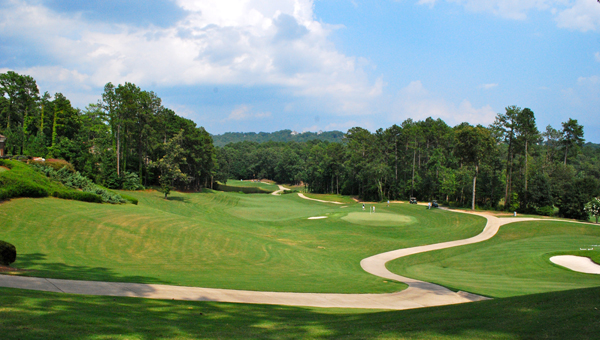 “It’s our biggest tournament of the year, it’s the one everyone looks forward to,” ICC Director of Golf Troy Raybon said.

The member-guest tournament is a longstanding tradition, stretching back to when the club was founded, Raybon explained. However, it has grown in the past 10 years.

The tournament falls on third weekend in July every year, and always follows the same format.

“It’s an, ‘If it’s not broken, don’t fix it’ kind of deal,” Raybon said with a laugh. “We do it at the same time every year, everyone marks it on their calendar.”

Tournament activities kicked off Thursday, July 16, with practice rounds and a putting contest from 10 a.m. until 5 p.m. The real competition teed off Friday, July 17, with an 8:30 a.m. shotgun for the first 9-hole match.

But the weekend isn’t all about golf. When not on the course, golfers enjoyed complimentary massages and haircuts on the club’s terrace, and breakfast and lunch catered by ICC Executive Chef Alan Martin.

There were also plenty of opportunities to socialize throughout the weekend, with a welcome reception at 7:30 on July 16 and a party, complete with a catered buffet dinner, at 7 p.m. on July 17.

“Probably half (the tournament golfers) are here for the golf and half for the socializing,” Raybon said.

The tournament draws regular participation year after year from many members as well as guests from out of town.

“There are a lot of the same people that (play each year),” Raybon said. “A lot of people come in from out of town and form friendships over the years.”

The member-guest tournament is also a chance to showcase ICC’s golf program. In addition to the 18-hole course designed by course architect Bill Bergin, ICC offers numerous lessons, tournaments and even a junior golf program throughout the year.

For more information about the club and its golf program, visit Iccalabama.com.

There are plenty of cozy places to read just like this one in the Harpersville Library’s new building. (Reporter Photo... read more