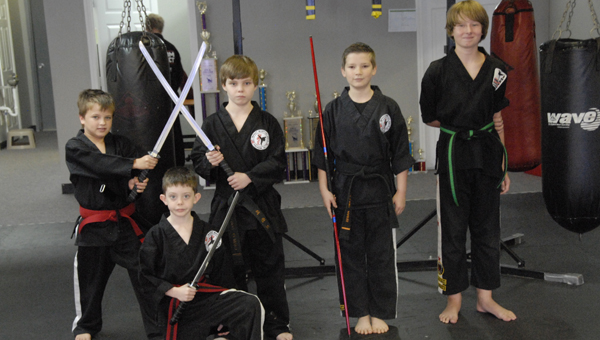 PELHAM – On a Friday afternoon in Pelham, kids walk in to a small building off of the Pelham Parkway dressed in black, twirling small swords, and warming up for their 4 p.m. class. This is the scene at Impact Martial Arts, the gym run by Karen Mitchell and Sean Gilham.

Mitchell has been in Pelham since 1990, and before that had been in Montevallo since 1981. She is an eighth degree black belt in tae kwon do and is the owner and head instructor of Impact. Gilham has been with Mitchell at Impact Martial Arts for the last eight years and is a fifth degree black belt in tae kwon do and serves as the chief instructor and office manager. They teach a number of different martial arts, the main one being tae kwon do, with jiu jitsu, kali, kickboxing and karate also playing a role in their teaching.

To the uninitiated, the difference between any of these is essentially nonexistent. But to those who have spent their lives dedicated to the field of martial arts, the differences are obvious.

“If I told you I danced, you wouldn’t know if I did tap, ballet or jazz,” Mitchell said. “They deal with where they come from, where they originate from.”

Mitchell and Gilham came to the world of martial arts in different ways. Gilham started in tae kwon do when he was 4 years old and has grown up in the world. Mitchell, on the other hand, started Impact in Montevallo following a personal trauma, and on the first night 15 people showed up.

Now, 24 years later, Impact services over 100 kids, meets six days a week and offers classes in the morning and the afternoon, with the ages of the children ranging wildly. The gym’s focus is on personal fitness, self-defense and fun, according to the gym’s website.

Gilham was always going to be a part of the martial arts world, and his landing at Impact was not a mistake.

For more information on Impact Martial Arts, visit the gym’s website at Pelhamtaekwondo.com.