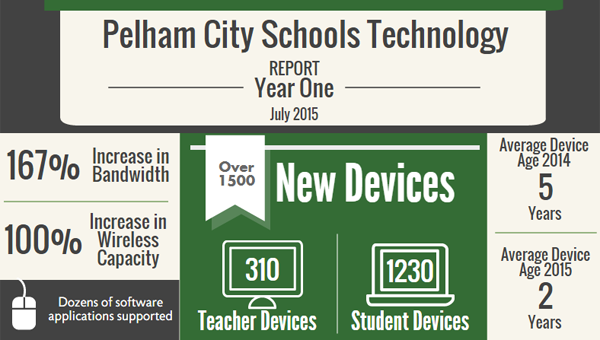 Pelham City Schools is bringing 1,500 new devices to the district as a part of its Cultivating Enhanced Learning project. (Contributed)

PELHAM— The upcoming school year will bring new technology to Pelham City Schools as the district is adding more than 1,500 new devices. Students will see about 1,200 of these new devices and about 300 will be given to faculty members.

While the district is installing some traditional Windows and Apple devices, the largest increase this year are the 36-Chromebook carts that will be divided between Valley Intermediate School, Riverchase Middle School and Pelham High School.

“It’s an extremely exciting time for teachers and students to have these devices in hand,” said Valley Intermediate principal Robin Hollingsworth. “Technology is an integral part of our lives and is a valuable learning tool. This is our future.”

The district plans to move to a more digital environment over the next several years, a plan that Pelham City Schools had named Project Cultivating Enhanced Learning or CEL.

“The goal for this year is to put the devices in the hands of students and teachers so they can begin to use the devices to aid learning,” said School Superintendent Dr. Scott Coefield. “It’s a long-term process, but we want all of our students have access to the technology they need to be successful.”

“We spent a good part of our year working to beef up our infrastructure to prepare for an influx of student devices,” he said.

Upgrades have been made to the system’s wired and wireless infrastructures, increasing the bandwidth by 167 percent and the wireless capacity by 100 percent since last year. Waddell said these improvements were needed to support the 1,500 new devices the district will be adding.

Waddell said the overall goal is that, through growth over the next several years, students will be using the new devices on a regular basis in every classroom across the district. He said this year’s implementation will allow students and teachers to begin using these tools and growing the digital capacity in our schools.

“Technology gives students access to information and resources that they don’t get from traditional paper-based resources,” Waddell said. “With a world of information available at the touch of a button, we’re focused on plans that help us create an atmosphere where students can learn in new and exciting ways.”

SPHS ranked among best high schools in the nation

The Spain Park High School class of 2015 prepares to receive diplomas during a graduation ceremony in May. (File) By... read more