SPHS ranked among best high schools in the nation 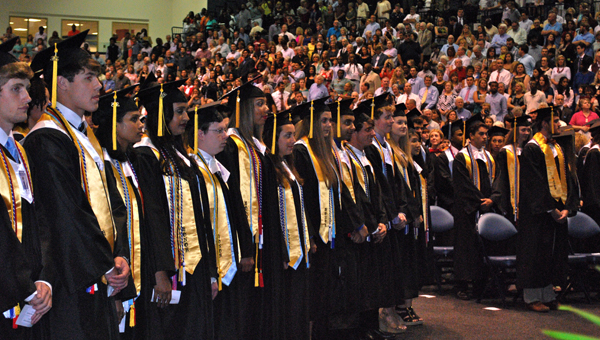 The Spain Park High School class of 2015 prepares to receive diplomas during a graduation ceremony in May. (File)

Schools were evaluated on two key factors, “That a great high school must serve all of its students well, not just those who are college bound, and that it must be able to produce measurable academic outcomes to show it is successfully educating its student body across a range of performance indicators,” the U.S. News and World Report methodology read.

According to U.S. News and World Report, the final list was compiled through a three-step process.

First, math and reading results from state high school proficiency tests were evaluated to determine if students at each school were outperforming the state expectations.

Finally, schools passing the first and second steps were evaluated for students’ college-readiness. This was determined by examining school Advanced Placement and International Baccalaureate scores.

To read more about how schools were evaluated, visit Usnews.com/education/best-high-schools/articles/how-us-news-calculated-the-rankings.

Spain Park boasts a 12-to-one student-teacher ratio, with a student body of 1,558 and 131 full-time teachers.

Students of Spain Park’s most recent graduating class were offered nearly $17 million in college scholarships. Ninety percent of the class of 2015 enrolled in four-year institutions and nearly 90 percent were offered admission to their first choice school.