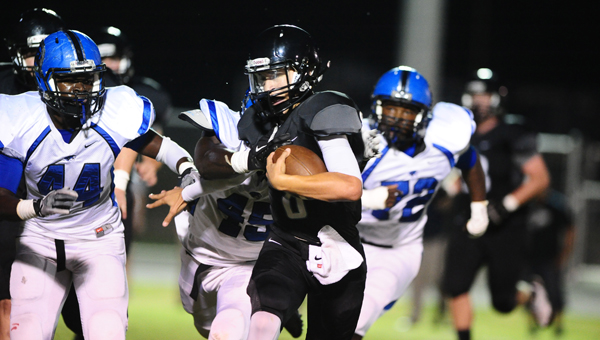 Diondre Sackreiter will split time at quarterback in 2015, and will be counted on to help lead the Huskies offense that scored over 300 points last season. (File)

For part 8, we turn to the resident new kid on the block, the Helena Huskies.

Honestly, no one knew what was going to happen in Helena in 2014. As a first year program, the Huskies had no point of reference to work from. They had athletes, sure, but no one knew how they were going to mesh until they actually got out and played some games. Trying to predict what will happen in a situation where there is no history is much more difficult than predicting one that does. It’s not that much easier a year in, (or at any point, for that matter), but let’s give it a shot anyway.

Helena made the 5A playoffs in 2014 as a first-year program, a successful season. The Huskies region, Region 4, is not particularly strong, and Helena had the athletes to handle the less talented schools in the region with ease. The Huskies ended the 2014 season 4-3 in the region, with a 29-point average margin of victory in their four wins.

Those four wins, however, came against every team in the region that did not make the playoffs, while the three losses came to the other three that did. Parker and company proved last season they’re not going to be a bottom-dweller, but now the task at hand becomes trying to break into the upper echelon of the region with Demopolis and Calera.

Leading the way for this Huskies team will be quarterbacks Diondre Sackreiter and Riley Davis. Both saw time last season before Sackreiter went down with a broken hand. Parker has no problem playing multiple quarterbacks, saying he would play three or four if he had the bodies. Both Davis and Sackreiter are athletes, with Davis being the better thrower and Sackreiter the better runner, and with neither likely to be given complete control of the offense, will have to stay mentally sharp even when not on the field.

The main target of Davis and Sackreiter is going to be Phildon Dublin, a rising senior who was also an All-State goalie in the spring of 2015. With the departure of Austin Davis to Thompson, Dublin is one of if not the de facto best athlete on the team, and will lead the way for Parker’s spread offense from the outside.

On defense, Parker is switching his base formation from a 4-2-5 to a 3-4, which means more linebackers and less secondary. The defense is young, with only a few seniors sprinkled throughout the unit. Brett Granger, a Louisiana-Lafayette verbal commit, will start at outside linebacker and be responsible for leading the defense.

Way-too-early prediction: Class 5A Region 5 does not look to be particularly tough. Calera will most likely be at the top of the region, but past the Eagles, the door is wide open for Helena to make a move. The youth and inexperience in some units, such as linebacker and defensive line, is juxtaposed with the offensive line and the offensive backfield, which have a wealth of experience between them. This team is not big, and history tells us rotating two quarterbacks with any degree of consistency is a recipe for disaster, but this will be Parker’s 14th season as a head coach in the AHSAA, and with six 8-win seasons under his belt and seven playoff appearances, the man knows what he’s doing.

At the end of the day, this team has the athletes to run over enough teams in the region to get back to the playoffs, and Helena will win more games this year than they did last season. Helena will go 7-3 in the regular season and win a game in the playoffs to boot.