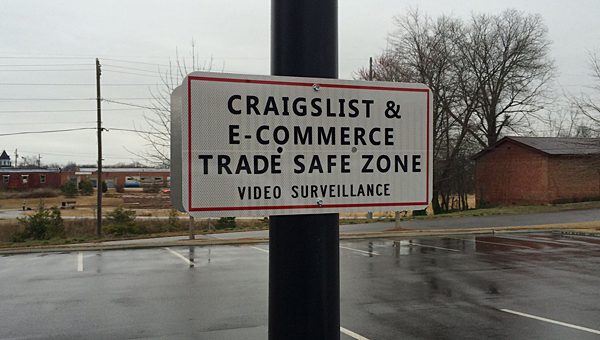 ALABASTER – Those who routinely buy and sell items through trading websites such as Craigslist.com soon may have safe zones to meet buyers and sellers in Alabaster, according to city leaders.

During a recent pre-meeting work session, Ward 4 Councilman Rick Walters distributed information on Craigslist safe zones created in other cities, and encouraged his colleagues to consider creating zones in Alabaster.

Cities such as Gainesville, Ga., and Conshohocken, Penn., have already established online trading safe zones in an effort to curb crimes such as robberies and thefts.

Each city established the safe trading zones in the parking lots of their police departments, and placed each zone under video surveillance.

Through online trading sites, sellers post photos and descriptions of their items. Interested buyers then contact the sellers and often set up in-person meetings to complete the transactions.

Walters said the safe zones provide public meeting places for such transactions, and benefit both buyers and sellers.

“For the sellers, you don’t have to have people come to your house,” Walters said, noting such a scenario sets up the potential for future thefts or robberies. “And for the buyers, it gives them a public, well-lit area to conduct the transaction.”

On July 21, Alabaster City Manager George Henry said the city is still studying the possibility of designating safe trade zones in the future.

“It’s a valuable service, and we can be on the forefront of safety,” Walters said. “There are a lot of cities across the nation that are doing this.”

Improvements wrapping up at Peavine Falls

Peavine Road is currently undergoing construction projects, such as expanding the parking lot, adding a vault toilet and work to... read more