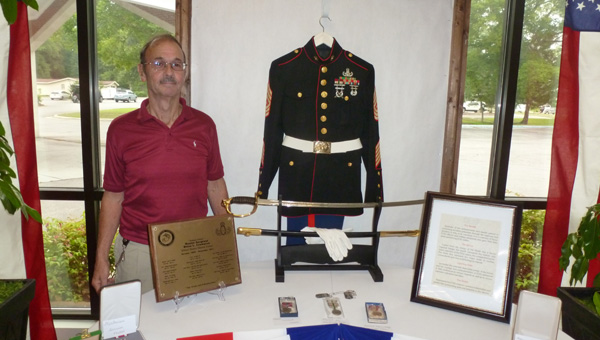 Master Sgt. Brian Crumpton, U.S. Marine Retired, stands beside his Marine dress uniform at his military display at the Hall of Memories at the First Baptist Church of Columbiana on Liberty Day. (Contributed)

Liberty Day celebrates Shelby County’s veterans each year at the Hall of Memories sponsored by The First Baptist Church of Columbiana.

Crumpton, who lives in Columbiana with wife Sandy, who is well-known at the Shelby County Museum and Archives, served in the Marines from October 1969 to November 1991.

After basic training, infantry training and artillery school, Crumpton served in Alaska where he corresponded with pen pal girlfriend Sandy Ray of Columbiana.

On Dec. 17, 1971, the two married at Four Mile Baptist Church, the last marriage before the devastating fire that destroyed the church.

The Crumptons moved to Camp Lejeune in Jacksonville, N.C. where they lived until Crumpton was deployed to Puerto Rico and Sandy moved back home to live with her parents while he served out of country.

In 1973 Crumpton volunteered for Explosive Ordinance Disposal School (EOD) in Indian Head, Md., where he found his military home and niche.

“I volunteered for EOD for it was more money,” said Crumpton. “It was dangerous work, but EOD was a small, close knit unit. The squad was small and we all knew each other. When I was deployed, the Gunny would be sure that Sandy and all the wives were taken care of. I never changed my MOS after I became an EOD. Every person and every job in the military is important. Organization does not work unless every man does his job.”

John Scalici will return to the Shelby County Shindig in Columbiana on Saturday, July 18 from 2:30-3:30 p.m. facilitating his... read more