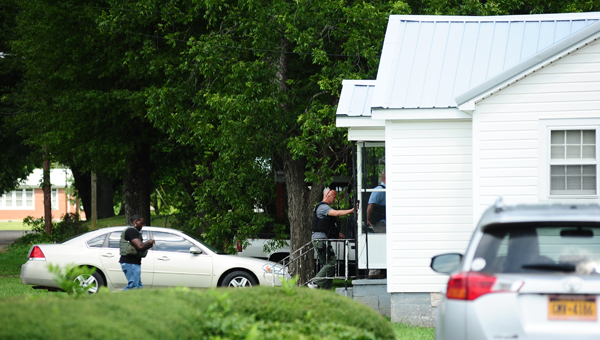 Six U.S. marshals enter Richard Fuqua’s home off Carter Lane in Columbiana at about 3:15 p.m. on July 21. Fuqua said the marshals were looking for his nephew. (Reporter Photo/Neal Wagner)

COLUMBIANA – Officers from the United States Marshals for the Northern District of Alabama conducted a search for a fugitive in Columbiana on July 21. The search was not related to the marshals’ July 21 arrest of Demarcus Means in connection with the death of 18-year-old Haleigh Green.

Multiple unmarked vehicles converged on a house off Carter Lane at about 3:15 p.m. Six marshals wearing bulletproof vests and tactical gear entered the house at 3:15 p.m. after speaking with the home’s resident, Richard Fuqua.

“They were looking for my nephew, John (Fuqua),” Richard Fuqua said during a July 22 interview. “I got home, and then they pulled in behind me.”

Richard Fuqua, a maintenance foreman with the Shelby County School System, said the marshals did not produce a search warrant, but he said he invited them into the house to discuss his nephew. The marshals stayed in the home’s living room during the visit, he said.

“I told them he was living down in Foley now, and I found the number to his bail bondsman and gave it to them,” Richard Fuqua said. “All they were looking for was him, and I told them all I knew. They were a good bunch of guys.”

Officers exited the house at about 3:30 p.m. and left the property without incident.

Richard Fuqua said he received several calls after the marshals’ visit, and said many asked if he was somehow tied to the Haleigh Green case.

“They were wanting to know what I had to do with the Haleigh Green case, but this is something completely separate,” Richard Fuqua said.

Shelby County has adopted a county-wide lightning safety policy for all outdoor venues and parks within the county. (File) By... read more