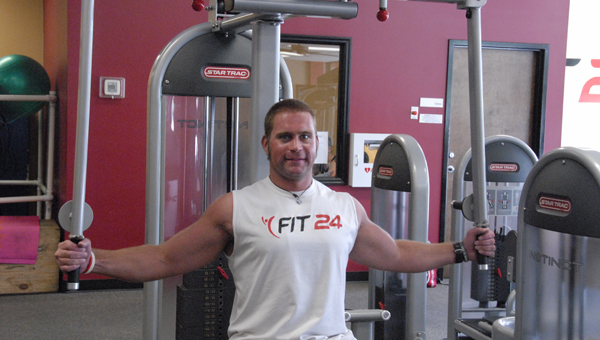 PELHAM— After almost five years of successful business, Alabaster-based gym, Fit 24, is planning to open two new locations, in Pelham and Calera, by the end of October.

“(I’m) very excited,” said Fit 24 owner, Keith Davis, in a July 21 interview. “It’s been a long time coming. It’s been a project for about a year now, so we’ve been slowly just getting it ready to go.”

Fit 24 will be opening on Huntley Parkway by Publix in Pelham and next to Donut Chef in Calera. Franchise owner, Austin Lockheart, will run the Calera location, and membership to any Fit 24 allows access to all three gyms.

In addition to the fitness classes offered at the Alabaster location, such as boot camp and body pump, the new Fit 24 locations will include aerobics areas to offer classes like zumba. All the gyms are opened 24 hours, every day of the year, and memberships include access to the tanning beds, childcare and classes.

Davis said he is especially excited about the Pelham location.

“I’m loving that one. I kind of stumbled across that location,” Davis said. “I wasn’t really aware that was over there. I was actually looking for some else to put a store there, and I was like, ‘I like that. I need to jump on that.’”

Davis got into the industry working at the YMCA and Anytime Fitness. He wanted to start a franchise and branch out, so he said he got a team and decided on the location. All the Fit 24 gyms have a family feel as well, Davis said, calling it a YMCA atmosphere just smaller.

“Smaller gyms work better. We are more of a family atmosphere,” Davis said. “When you keep it smaller, you know all your members better instead of those big globo gyms. People can get lost in there. They’re intimidating.”

Although the Calera and Pelham locations will not be open until October, Davis said people can sign up anytime. They won’t be billed until the storefront has open.