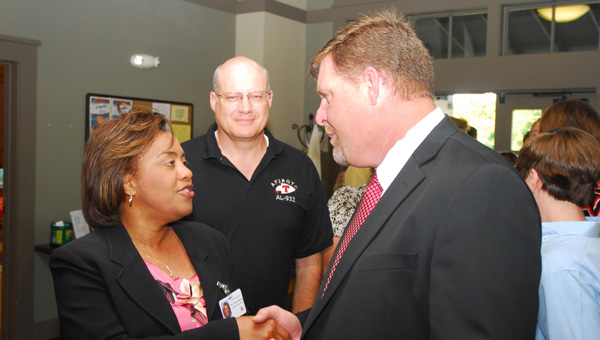 ALABASTER – The Alabaster City School System is working to find a new principal for Thompson High School after the school’s former principal stepped down to take the same position at Demopolis High.

Chris Tangle, who was hired as the THS principal in June 2014, was named as the principal at Demopolis High School during a July 14 Demopolis Board of Education meeting.

He was recommended for the DHS position by Interim Demopolis School Superintendent Frank Costanzo, and was named the DHS principal on a 12-month contract, according to the Demopolis Times.

Tangle, who was the principal of Saraland Elementary School before coming to Thompson last year, served previous tenures as principal of Demopolis Middle School from 2012-2014, transportation and athletic director at DHS from 2002-2005 and assistant principal at DHS from 2000-2005 and from 2010-2011.

The Alabaster Board of Education voted unanimously to hire Tangle as the THS principal on June 17, 2014, which was about a week after former THS principal Dr. Daniel Steele took the principal spot at Alabaster’s Thompson Sixth Grade Center.

The same day Tangle was hired as the DHS principal, the Alabaster School System posted a job opening for the THS principal spot on its website. The position will be posted until the job is filled, according to the site.

The job description said principal candidates must be ready to “serve as the instructional and administrative leader of the school, to work with staff, students, and community to ensure a high-quality educational program, and to formulate and accomplish the school mission.”

The Alabaster-based Community Response Systems company is working to install its security software at all Alabaster school buildings. (Contributed) By... read more