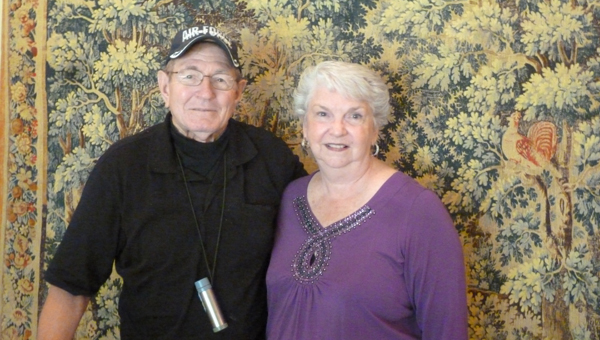 Bill Wyatt is an Air Force veteran during the Korean War Conflict, six-time cancer survivor, and the longest serving veteran on the Alabama Department of Veterans Affairs. Wyatt is a lifelong Harpersville resident. Pictured are Bill and Pat Wyatt, who have been married 55 years. (Contributed)

William A. Wyatt of Harpersville is an Air Force veteran, six-time cancer survivor, and veterans’ advocate who lives each day to the fullest.

“I just live one day at a time,” said Wyatt. “I tell people that if you plan on getting old, you need to toughen your tail up!”

Wyatt unfortunately had to toughen up early in life.

He attended Vincent School where his mother was a teacher.

When he was 14 years old, she died at school from a massive brain aneurysm.

He grew up that day.

A brilliant man who was double promoted twice, Wyatt graduated from high school at age 16 and enlisted in the U.S. Air Force in 1953.

After training in air traffic control, Wyatt was deployed to Japan for three years where he dispatched fighter pilots on their missions during the Korean Conflict. He was 17 years old.

“I was born responsible,” said Wyatt. “I had a lot of responsibility in the Air Force, but I had been taking care of myself since I was 14. I was a Staff Sergeant, four stripes, when I completed my tour in 1958.”

Wyatt came home to Harpersville, became a truck driver in 34 states, and married wife Pat on Sept. 2, 1960, in a double wedding with cousins.

The Wyatts have been married for 55 years, have two children, one grandson, and one great-grandson and are members of Chelsea Church of Christ.

After nine years driving an 18-wheeler, Wyatt went to work at Liberty National Insurance as the in-house mechanic until his retirement.

In 1984 life changed when Wyatt learned he had colon cancer.

“Fighting cancer is all about your attitude,” said Wyatt. “You have to believe you can beat this.”

That incredible strength of will and determination has kept Wyatt going through six different cancers: Colon, 1984; prostate, 1994; vocal cord, 2004; squamous in hand, 2007; lymphoma, 2008; and larynx cancer in 2011 where Wyatt had a total laryngectomy, the removal of the larynx and separation of the airway from the mouth, nose and esophagus. He breathes through an opening in the neck known as a stoma and speaks with a Servox. Nothing keeps this vet down.

Wyatt is the longest serving veteran on the Alabama Department of Veterans Affairs, appointed during Gov. Don Siegleman’s term and reappointed by every governor since.

He was a founder of the Blue Star Salute where his card is number 1 and wife Pat is number 2.

He has been a member of American Legion Post 43 for 46 years and commander for the last 21 continuous years.

Wyatt is a man with an incredible strength of will and fortitude who has committed his life to help others.