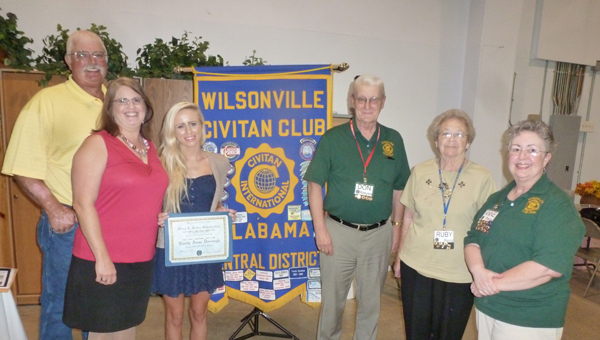 Emily Dorough was awarded the Revis Memorial Scholarship sponsored by the Wilsonville Civitan Club at the June 2015 dinner meeting held at Wilsonville United Methodist Church. Dorough is the daughter of Janice and Jim Blackmon of Wilsonville.

Jim is the assistant fire chief of the Wilsonville Fire Department and president of the Southeast Shelby Rescue Board of Directors.

She received an Academic Leadership Scholarship at the University of Montevallo, where she plans to attend in the fall. She won the nationwide essay contest and cash scholarship by the 911 Foundation, eligible to students of first responders.

“I was blessed to attend Cornerstone where the teachers encourage you to challenge yourself,” said Dorough. “Cornerstone has some of the greatest teachers with the biggest hearts. I am so honored to receive the Revis scholarship.”

The Wilsonville Civitan Club was chartered in 1947 and has been the source of much community philanthropy and volunteerism in Wilsonville since its inception.

In the 1950s the club built the cafeteria at Wilsonville Elementary School.

In the 1960s the club built the concessions stand and two bathrooms at the Helm’s Ballpark in Wilsonville.

In 1973 after the devastating tornado, the club repaired the concession stand and replaced the pole and lights that had been damaged at the ballpark.

This year the club donated $5,000 to WES to complete the funding for the new playground.

In addition, Alan’s widow, Ruby Revis, received a Lifetime Civitan Membership for her devoted service to the club.

Dr. Amanda Lea Robinson, center, holds her Doctor of Osteopathic Medicine degree that she received in May 2015 from the... read more