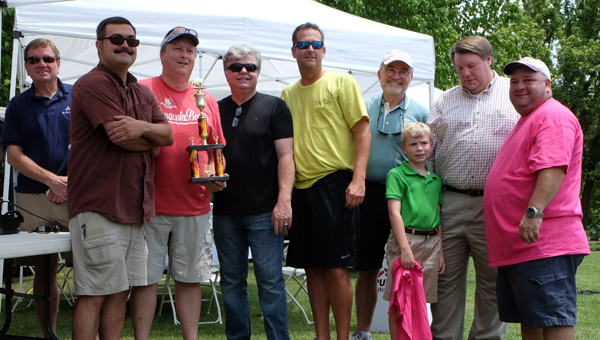 There was no lack of tasty Boston butt offerings and variations at the Helena Market Days Best Butt Contest held on July 11.

As is tradition, competing teams set up their equipment and tents in Amphitheater Park the prior evening to share the prep and cooking load and the camaraderie offered by this southern “sport.”

The following morning, market goers were able to taste the results at any of the nine competitors and vote with their pocketbooks for their favorite.

Over $1,700 was raised for Friends of Helena Schools.

Judges were Birmingham News food critic Bob Carlton, who toured the state in the past year in search of Alabama’s Best BBQ Ribs, our own Mayor Hall, House Representatives Matt Fridy and Allen Farley and Chef Joseph Sciarotta.

Breakfast eaters could enjoy a sausage and biscuit from Vittles, as well as barbecue with white sauce or jalapeno peach sauce. Vittles was presented with a trophy for Best White Sauce and Best Blue Sauce by the judges.

Buck’s Bama BBQ was the winner for the Red Sauce Category.

In Sweet Willie’s Man Grill tent was Jarrett the Grillmeister, whose T-shirt proclaimed him to be “the man, the myth, the legend.”

Nearby was Pig Lebowski (and friends).

The Boom Shaka Laka team of Jim Wathen and John Hosmer had a cozy set-up with two stylish recliners and their Best Butt in Helena 2014 and People’s Choice 2013 trophies prominently on view.

“Our special rub was created from 15 spices by John Hosmer. We like Penzy’s spices,” Wathen added. “We start with charcoal then add hickory and pecan. We salt and pepper, douse with Worchester sauce, then smoke for five hours. A final glaze of apple juice and ketchup is applied.”

Mariah Hamrick, soon to be an HHS senior, appreciates the services of Ly Mai at Nail Star. (Contributed) By LAURA... read more