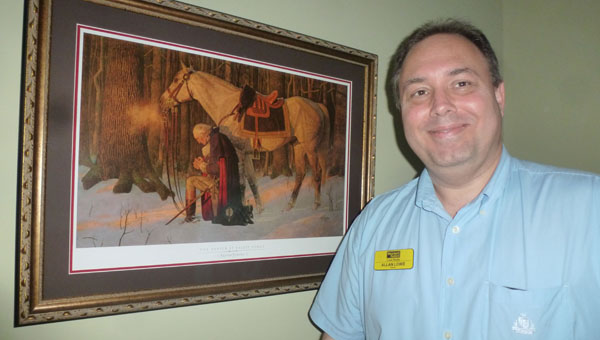 Following in the military tradition of his late father, Chief Warrant Officer 4 Johnny Lowe, he joined the Alabama Army National Guard in 1985.

“I enlisted to honor my Dad, and then I realized serving in the military was a privilege,” said Lowe. “I did not join for the food, the pay or snazzy clothes, but for the satisfaction that I was helping my country when it needed a defender.”

1989 was a life-changing year for Lowe; he joined his parent’s, Jean and Jonny Lowe, new real estate business, Lowe Real Estate, and met his future wife Scarlott on a blind date.

“I was engaged to Scarlott to get married in November,” said Lowe. “My father came to me the day of the invasion and said I was going to get called up. ‘If you are going to get married, you better do it now.’ Scarlott and I got married the next day, Aug. 3. I soon got my orders to go overseas.”

In 2003 Lowe was called to serve once again in Operation Iraqi Freedom.

“I served my country, served in two wars and felt it was time for my family,” said Lowe.